Home » BLOG » DIAMOND IN THE 6IX
Previous Next

DIAMOND IN THE 6IX

Construction has begun on the $2 billion CIBC Square set to straddle the rail corridor at the south end of Bay Street near Union Station.

After a decade of work to get this project underway, construction has finally begun on the new CIBC Square. The project, which is a $2 billion undertaking, will straddle the rail corridor at the south end of Bay Street. This beautiful addition to Toronto’s city skyline will bring two much needed commercial towers, a new and improved GO Bus Terminal and a one-acre elevated park connecting the two commercial towers over the rail corridor. Developers Ivanhoé Cambridge and Hines, along with WilkinsonEyre Architects and Toronto’s very own Adamson Associates, are aiming to elevate the standards affiliated with urban towers.

Naming rights go to CIBC, the lead tenant of the two-tower commercial space. CIBC’s head office along with 15,000 of their employees will eventually occupy a portion of the nearly three million square foot plot. Construction began in July 2017 just south of the rail corridor on the first tower. This tower will be 49-storeys, said to be completed in 2020, along with the brand new GO Bus Terminal. The second tower will be 54-storeys and is scheduled to be complete by 2023 along with the elevated park that bridges the two towers over the rail corridor.

The design of these two towers is nothing short of stunning, adding a diamond-like facade that reflects the character and level of excellence expected with this project. Developer Ivanhoé Cambridge say that “each building will be equipped with an extensive array of amenities far exceeding anything available in the Toronto marketplace today.” [2] These amenities include a high-end fitness centre, exclusive bicycle-parking and showers for tenants, restaurants ranging from casual to fine-dining, as well as a café and market-style eatery that promotes healthy food choices. In addition to these amenities, they will be the first to offer an interior area for VIP parking and an area for tenant and client limo/taxi pick-up and drop-off. 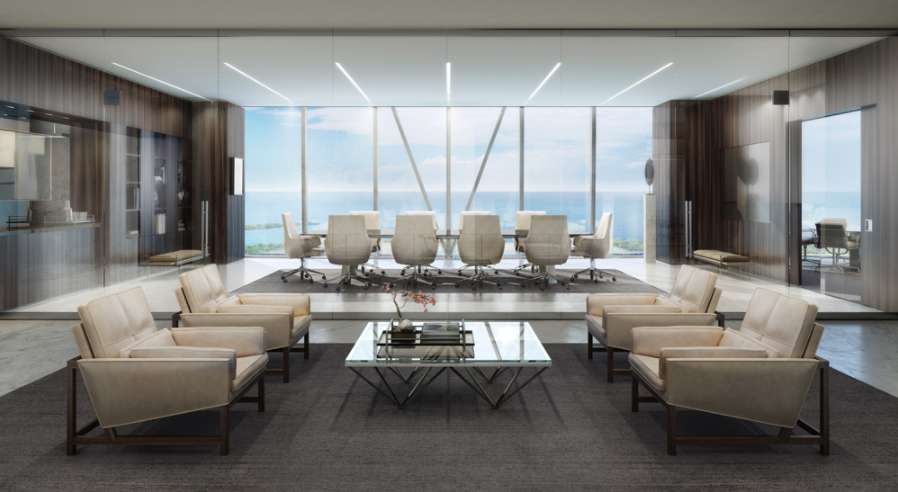 The proximity to Toronto’s glorious waterfront will provide incredible expansive views of the lake and city skyline. This will surely be a very sought after commercial space for companies striving to impress clients from around the world. Ensuring their worth as a world-class development, beyond the amazing amenities and spectacular views, their design aims to attain accreditations with LEED® Platinum (energy and environmental), WELL Building Standard (health and well-being), and WiredScore Platinum (digital infrastructure). 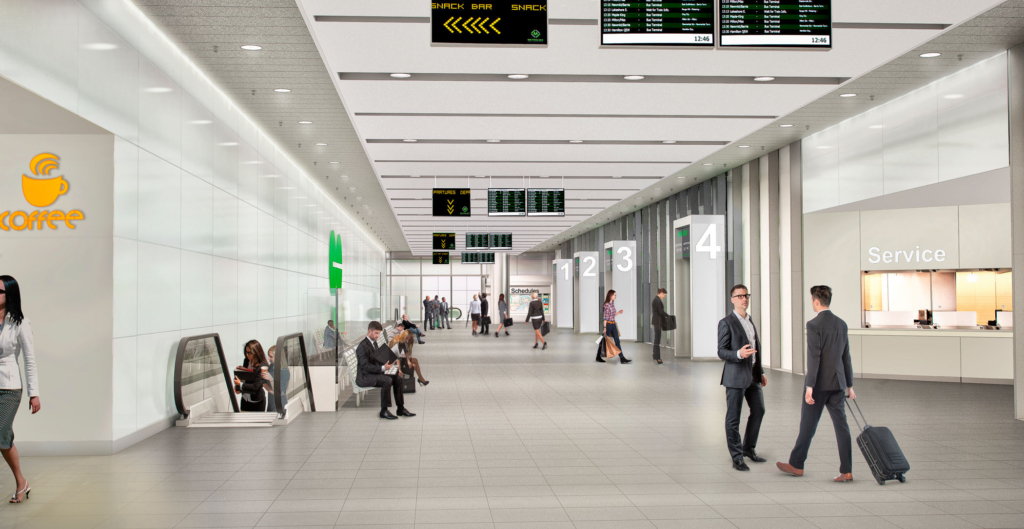 Accompanying the space south of the rail corridor will be a new GO Bus Terminal. This terminal will be twice as large as the current one, housing 14 bays compared to the current seven. As it stands now the aging terminal that currently exists north of the rail corridor is struggling to keep up with the increasing number of commuters that go through the terminal each day. An average of 60,000 commuters pass through the small bus terminal with 600 daily bus trips. Beyond doubling its size, the new terminal will be connected through the PATH system allowing for quicker connections to all forms of transit: GO, TTC, VIA Rail and the Union-Pearson Express. There are even talks of potentially accommodating intercity bus lines to alleviate those that go through the Coach Terminal at Bay and Dundas. 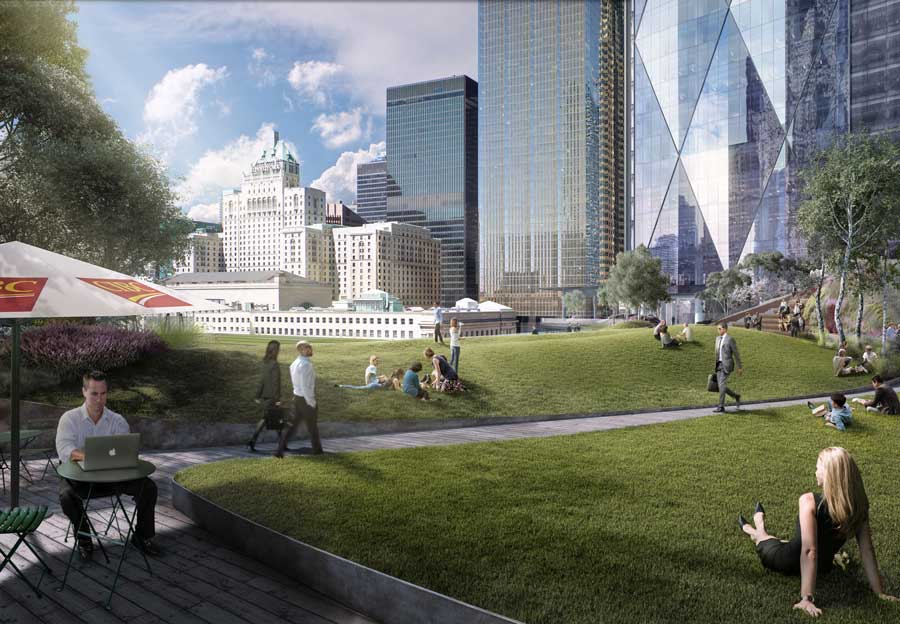 Connecting the two towers will be a one-acre elevated park that covers the rail corridor. Designed by Biederman Redevelopment Ventures (who famously revitalized NYC’s Bryant Park), we’re entrusting these experts to prove that such a project is feasible here in Toronto. With talks of a Rail Deck Park on the west end of the rail corridor, the success of this greenspace could be a great shift for creative thinking when it comes to Toronto’s outdoor spaces.

Toronto is quickly becoming a star on the global scale and it’s thanks to projects like this that keep the momentum going. With talks of so many new projects on the horizon for our city, it’s nice to see some are just a few years away from completion. On the smaller scale, this project is sure to be a huge improvement for commuters. On the global scale, the level of excellence behind the design of CIBC Square will help catapult Toronto to the top of the ranks in terms of commercial standards. 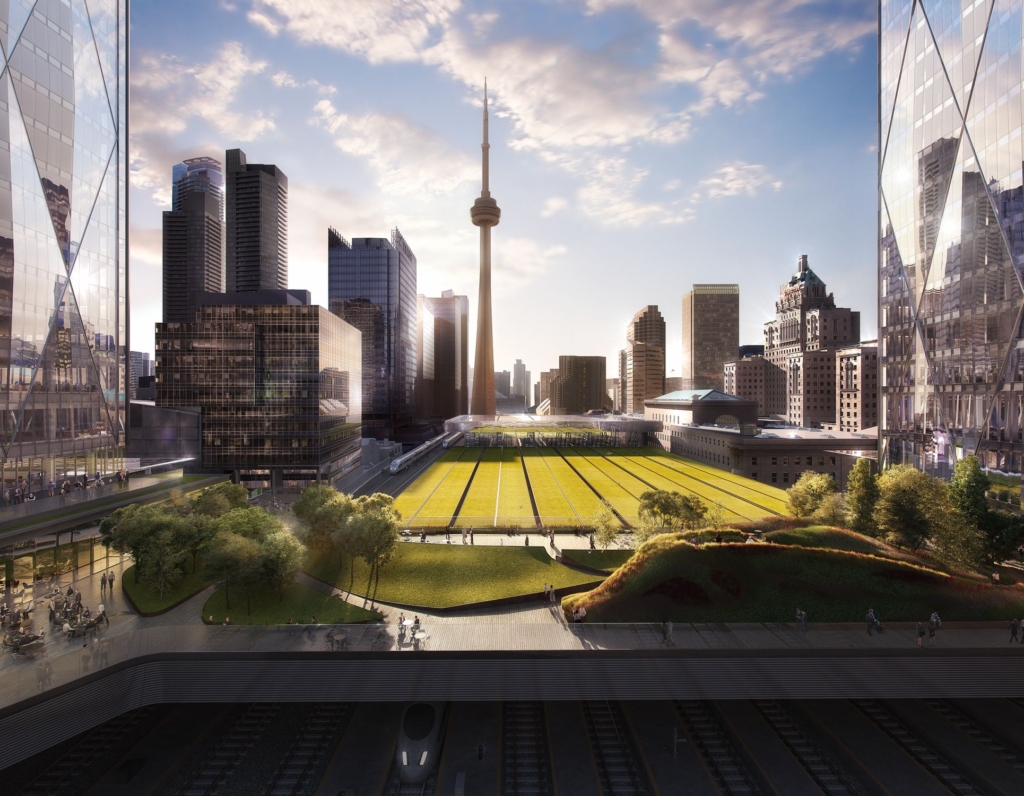 If you’ve invested in this area recently, the addition of these developments is sure to benefit. Thinking about investing in pre-construction? We’ve got a few lucrative options on the horizon. We’ll get you VIP early access to the hottest pre-construction investment opportunities. Register as an Insider and we’ll send you the updates straight to your inbox. Register today!