At the corner of Bathurst & Bloor there is progress on the future Mirvish Village! Plans include new retail space for small businesses, 800+ rental units, and space for art and community!

In the fall of 2017 we saw the end for Honest Ed’s. The same team who installed the iconic Honest Ed’s sign in 1984, the Pattison Sign Group, removed the iconic sign from the corner of Bloor and Markham to preserve and eventually relocate it to the Ed Mirvish Theatre in downtown Toronto. We’re all used to seeing the very large empty lot at the corner of Bloor and Bathurst where the future Mirvish Village will exist. Here are some of the exciting plans, expected to be ready for 2022.

MAINTAINING THE HERITAGE OF MIRVISH VILLAGE

Understanding the importance of preserving a piece of Toronto’s history, developer Westbank has hired ERA Architects as their heritage consultant for the project. ERA have been involved with many heritage conversion projects in the city, including the Distillery’s Gooderham Worts, Maple Leaf Gardens and the AGO to name a few.

Through extensive consultations with the city and the community at large, the revised proposal will maintain 23 of the 27 heritage buildings already existing on the site. The majority of these buildings are on Markham Street, which will be returned to its former glory as a pedestrian-friendly market street. The historic buildings will be carefully renovated into restaurants, shops and galleries, generating a vibe one would expect from a Yorkville/Kensington hybrid. 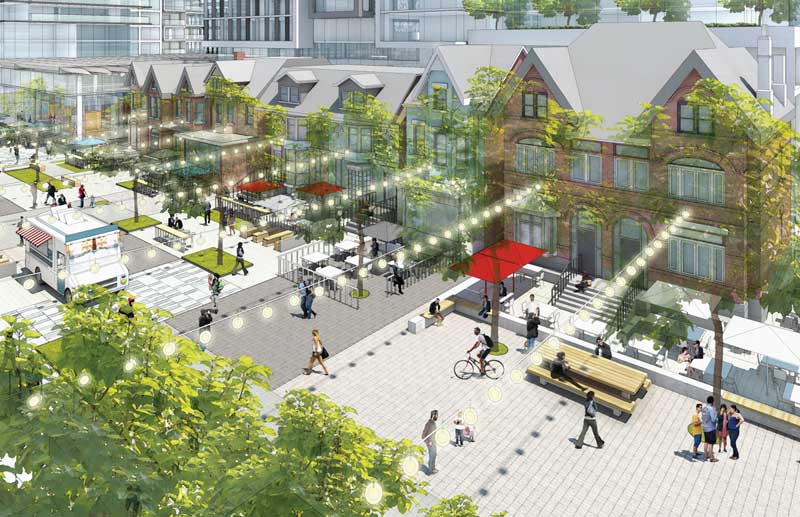 In order to preserve as many historic buildings as possible, one of the historic homes on Markham Street will be relocated a few metres south of its current location to allow for a new laneway. Heritage properties on the corners of Bathurst & Lennox and Markham & Bloor will remain in place as a conscious design decision to interwork the preservation of these heritage properties into the new residential and retail properties.

Preserving the physical history of Mirvish Village is one thing, but preserving the traditional market vibe that Ed Mirvish was famous for is something else altogether. Fear not—the Honest Ed’s Alley isn’t going anywhere! It will be revamped with a canopy art installation of famous Honest Ed quotes. Along the south of the alley will be a series of micro-retail shops and just south of Bloor will be the new Mirvish Village Market, which will spill out onto the main square. 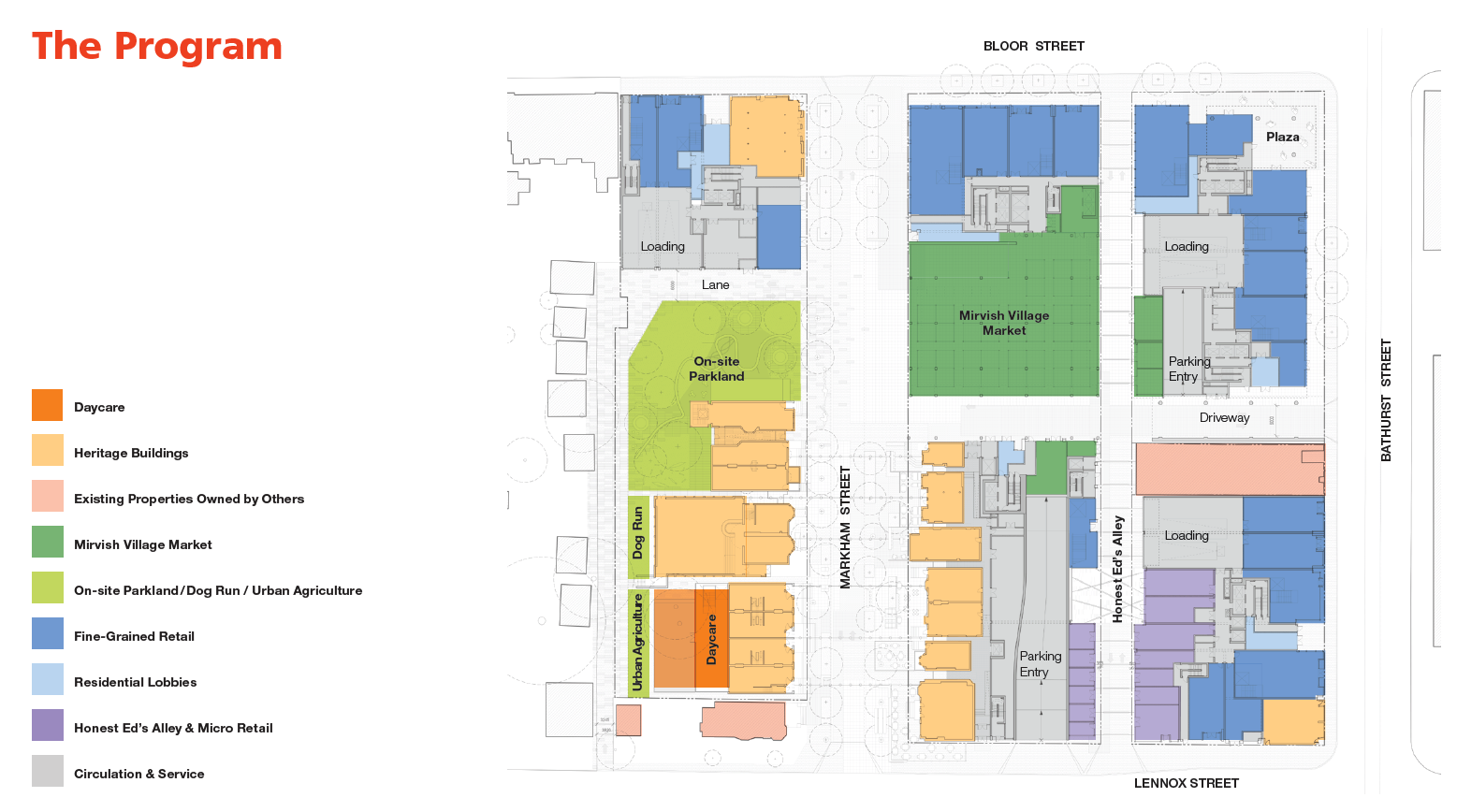 Ensuring Mirvish Village is still a place where the community can come together is reflected in the vibrant parkland that will be parallel to the Village Market at the north-west corner of Markham Street. The proposal explains that “the extent of the park will weave into the adjoining spaces, extend behind the heritage houses and will be carried into the lanes by the expression of the continuous ground plane treatment.” Beyond that, there will be space for public art, including a water feature intended to subdue some of the city noise from beyond the village.

Small storefronts along the perimeter of Mirvish Village aim to support local small businesses in Toronto and offer spaces for retail pop-up shops. The storefronts will extend to second floor and below-grade levels, maintaining a street-level shop experience, easing into the residential high rises scattered throughout. These narrow retail spaces are designed individually by Henriquez Partners Architects in such a way that each retailer is able to stand out from the rest—no two alike. 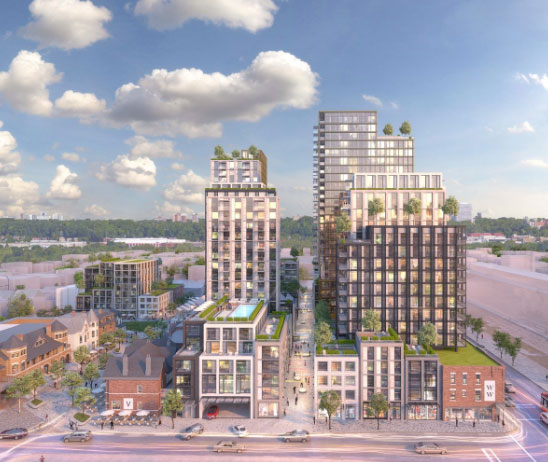 Residents will be happy to hear that there will be roughly 800 Mirvish Village condo units coming with the new development. And as if Ed Mirvish had a say in it himself, these will all be strictly rental units, adding some much needed affordable housing to the area. The proposal says there will be five towers, the smallest being 13 storeys and the highest hitting 26 storeys. There will be a little something for everyone with a mix of studio, one, two and three bedroom units as well as a handful of live/work spaces. In an effort to ensure there’s adequate family-sized housing available, 40% of units will have two bedrooms and 10% of all units will have three bedrooms. Following suit with the individual character that is being applied to the retailers below, each tower will have its own unique architectural style. 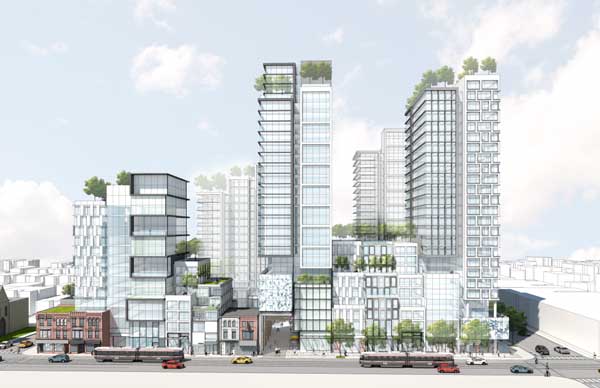 With every new development proposed for the city, the ways in which they choose to minimize their impact on the environment is always a point of curiosity. As with most new developments they’re striving for LEED Platinum ND Certification and Tier 2 of Toronto Green Standards. What’s original with this development is their Neighbourhood Energy System (NES). Westbank and Creative Energy have come up with an energy system that would be low carbon and low cost for the community. By centralizing the system (which will exist below ground) into one plant for all buildings, the cost is effectively reduced. Heating and cooling pipes transfer energy from the centralized plant to the individual buildings. Talk about foresight — the design will have additional capped connections so that future buildings in the area can opt-in to an energy system that is low-cost and reliable. For more on this system, visit the Mirvish Village site. 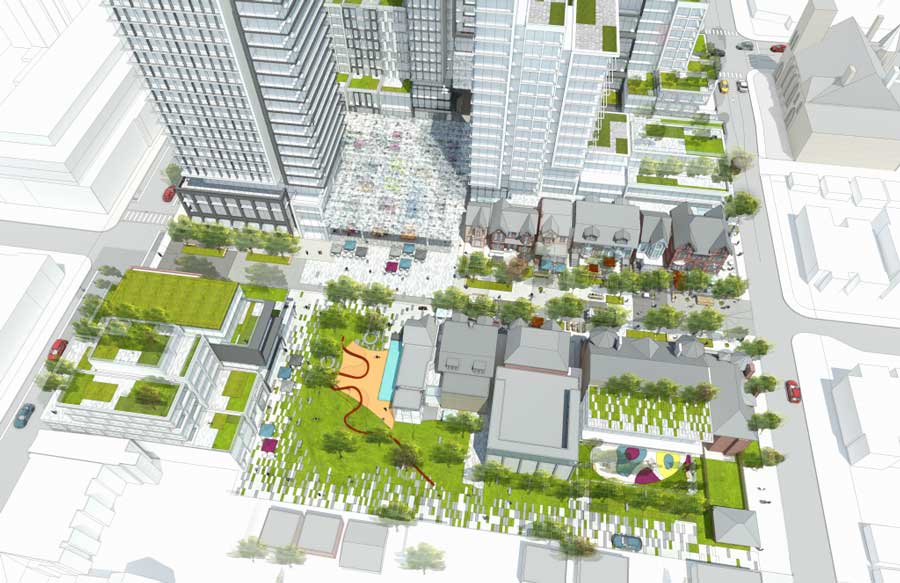 You can see from the artist renderings, rooftop green space is plentiful. The rooftops will have trees and greenery atop and Mirvish Village will also be home to a community gardens. With a strong community focus, you better believe there will be farmers’ markets too!

While there will be parking available underneath Mirvish Village, they’re hoping to encourage people to walk, bike or take transit instead. There are talks of adding an additional entrance to Bathurst Subway Station as well as bike share services being installed. “By providing alternative transit options, residents of Mirvish Village are encouraged to reduce car ownership and car dependence.” [1] Taking into account the long-term effects on the environment from the urban design standpoint are invaluable. They set the standard from which future developments can build from.

Change isn’t always easy to accept, especially when what’s being changed has been such a community staple. But with a little bit of patience and an open mind, I think we’ll be surprised by how much we like the future Mirvish Village. For more details on the Mirvish Village development, including the phases of development, visit mirvish-village.com.