NEIGHBOURS OF FORMER TORONTO SLAUGHTERHOUSE HOLDING THEIR BREATH FOR CHANGE

It’s been four years since Quality Meat Packers Ltd. shut down their slaughterhouse in the Niagara neighbourhood. The residual foul odour has remained a point of contention. But good news is on the horizon. Plans include a fully excavated cavity… to you know maybe remove that delightful lingering smell.

It’s been four years since Quality Meat Packers Ltd. shut down their slaughterhouse in the Niagara neighbourhood of Toronto. The area’s residual foul odour has been a point of contention for many local residents ever since. But good news is on the horizon.

TAS DesignBuild, along with KPMB Architects, have proposed a six building mixed-use development for the area of 2 Tecumseth and 125 Niagara Street. The development will carefully preserve Toronto’s heritage by renovating the Wellington Destructor building and incorporating the original Abattoir into the base of one of the buildings. The interior of the Abattoir will be fully excavated, ridding any remnants of the slaughterhouse’s nearly 100 year history. 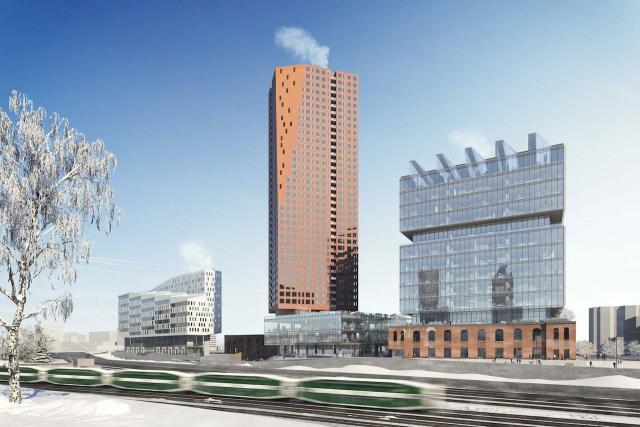 The proposal includes 651 residential units, retail and office space, restaurants, and even a commercial-scale greenhouse. The project site is laid out in three distinct plans designed by Public Work. The first is the Lowlands. This narrow strip on the west side will house building three, a 15-storey residential tower (297 units) with retail space at street-level. The middle section is the Creek Bank, existing over the former Garrison Creek, followed by the Plateau on the east. The Plateau will house buildings one, two, four and five.

Building one will be a 13-storey retail and office space and will sit atop the original Abattoir that was built in 1916. It will be directly connected to building two through a shared concourse level. Building two is proposed to have 33-storeys of residential space (354 units), with the five lowest storeys reserved for retail and office space. Buildings four and five are one and two-storey commercial buildings respectively.

The centre of the overall project will have a common courtyard, but the absence of any proposed park space is a concern to the City. While there may not be any proposed park space for this small irregular shaped project site, the area is no stranger to new park developments. In fact, there are four other developments planned within the 1.3km stretch from Blue Jays Way to the western point of this very project. The biggest one being the highly anticipated Rail Deck Park which will bring 21 acres of neighbouring green space.

Hover over new developments coming to this area above.

Southwest of the Rail Deck Park, alongside the Fort York Public Library will eventually become the two-acre Mouth of the Creek Park, also designed by Public Work. Another interesting development for this area is the temporary container market, Stackt. Set to open this spring, Stackt will bring life and community to the currently vacant site at Front and Bathurst Street, just east of the TAS development site. 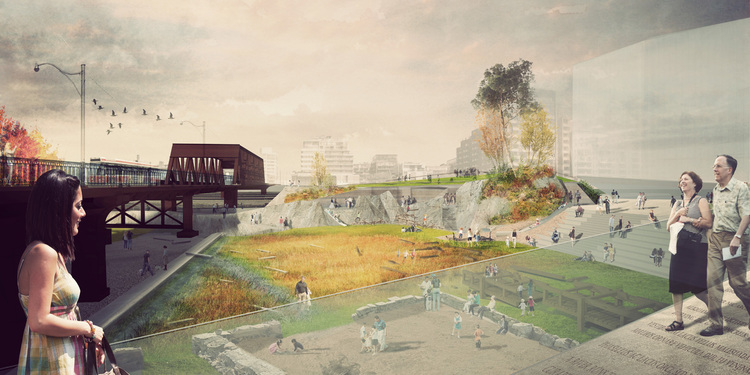 In addition to the 651 residential units that TAS is bringing to the area, the Well is another highly anticipated development slated for the block bordered by Wellington, Spadina, Front and Portland Streets and will contribute 1,587 residential units to the area. Along Wellington will be a promenade featuring wide sidewalks lined with trees, public terraces and a feline-themed park to complement Berczy Park, the dog-themed park that opened last summer.

The TDSB has also announced the addition of two schools to accommodate this fast-growing residential neighbourhood. The schools, Bishop Macdonell Catholic and Jean Lumb Public, will be located between Canoe Landing at Brunel Court and will collectively serve roughly 1,100 students from kindergarten to grade 8. If all goes as planned, the schools should be ready for the 2019/2020 school year.

Despite all that’s in store for this area between Liberty Village and City Place, I’m sure the current Niagara residents will continue to hold their breath until the former slaughterhouse has been fully gutted (excuse the pun).