With the success of Toronto’s condo market, there’s a new reality of trading prices across the city. Read on to learn why $1,000 per square foot is Toronto’s new real estate norm.

It’s no secret that the Downtown Toronto condo market has experienced incredible gains over the last few years, but what people seem to be less familiar with is the reality of trading prices across the city. With both pre-construction condos and their resale counterparts trading around the $1,083 price per square foot Toronto average, we want to take the opportunity to educate buyers and investors as to why this over $1,000 price per square foot is Downtown Toronto’s new norm.

We’ve covered similar topics in the past, writing about Toronto condo shortages and square footage prices increasing in 2017. This became newsworthy after Urbanation reported that new builds had set a new record of $1,000 as Toronto’s price per square foot. This price has remained the average price per square foot in Toronto for a couple of years now, so it will be interesting to see the new price point become the new normal for many pre-construction launches and increasingly so for resale.

When it comes to pre-construction condos, the cost to build is more expensive than ever. Labour costs, material costs, city-imposed development charges, and land prices are all driving up the average condo price in Toronto. Lumber prices have climbed since the start of the pandemic and show no signs of stopping, according to CTV News, mostly for reasons related to supply and demand. People are staying home and saving their money instead of going out and spending it with family members and friends. This means they have more money to save toward building or buying a home, and many people have this idea in mind. The amount of people working from home on a consecutive basis or consistent schedule also realize they can move to a larger home, which is increasing the demand for larger homes.

But material costs aren’t the only thing driving up the average price per square foot in Toronto. Material Babak Eslahjoub of Core Architects said to the Globe and Mail that “construction costs are going up as a result of the demand being quite high; we’re the victim of our own success.”

In Toronto specifically, there’s not a whole lot of land left to develop. Parking lots around the city are quickly transforming into condo developments. In the past five years, according to Bloomberg, the cost of land for developers to build has nearly tripled. With each parcel of land that is sold, it sets the benchmark price for the next development.

Once a benchmark price to build has been set, it’s impossible for developers to sell their projects for less going forward. It’s irreversible and so each condo development will typically launch at a higher price point.

If the price point is perceived as too high for buyers, the developer will simply wait to launch until they can attain the price they need to be profitable. And so the cycle goes as such:
As developers hold back from building, the lack of new inventory forces buyers to turn to the resale market. As the resale market absorbs the demand for inventory, their prices will begin to increase and it’s at this point where pre-construction developers will choose to launch. Heading into 2020 the idea was that this price per square foot Toronto cycle would push many developers to release their new builds above $1200 cost per square foot. While we’re not quite there just yet, the price per square foot is on the incline. 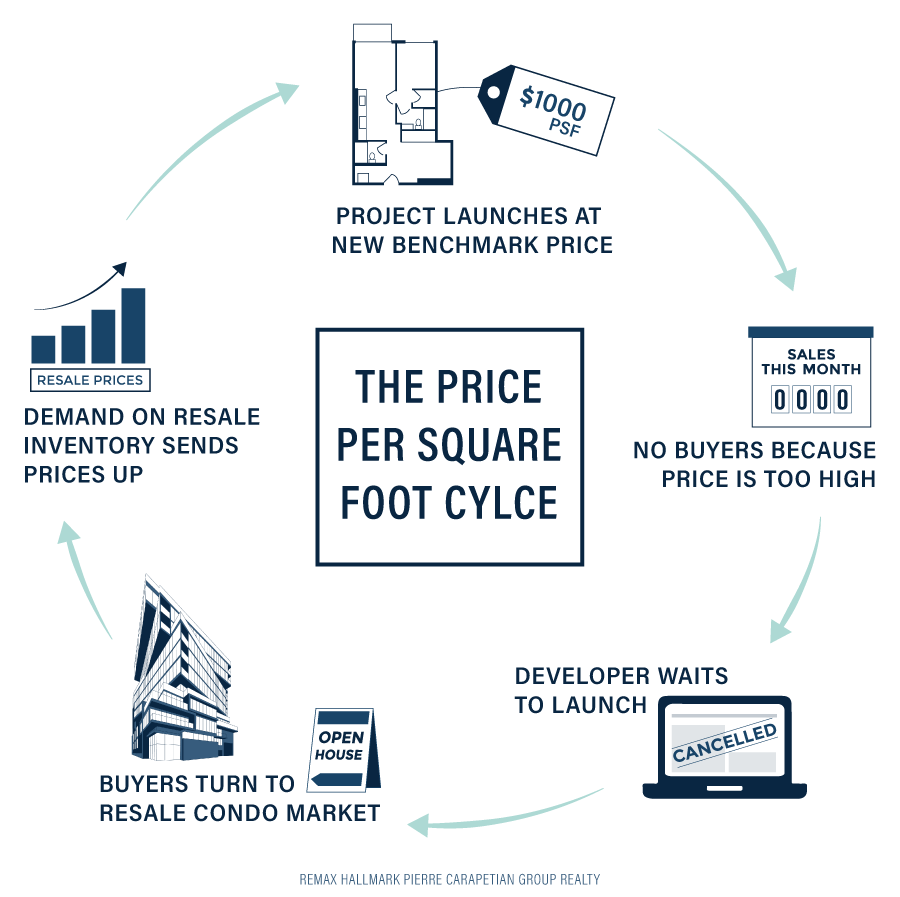 WHY $1,000 PER SQUARE FOOT IN TORONTO IS THE NEW AVERAGE

Throughout the city, there are many resale condos that are commanding $1,000 or more for price per square foot. Notable condos that have been trading at over $1,000 per square foot this fall are Victory Lofts (King West), Clear Spirit (Distillery District), Bisha Residences and Theatre Park (Entertainment District), as well as The Berczy and 88 Scott (St. Lawrence Market).

“Demand for ownership housing has remained strong despite a pandemic-related lull in population growth,” shared Crigger. “Of specific note is the condominium apartment market, which has seen a marked turn-around in 2021 with sales up compared to last year. First-time buyers, many of whom were slower to benefit from the initial recovery phase, remain very active in the market place.”.

Canada’s conservative lending guidelines means those who aren’t well-funded won’t easily get a mortgage. This is what makes Canada’s real estate market and economy so stable and why you won’t see any drastic downturn in the market anytime soon.

The average condo price in some Downtown Toronto neighbourhoods have increased 20% over the last few years. So even if the market were to dip 5-10%, you’re still losing out by waiting. Two steps forward, one step back.

It’s time to accept that $1,000 or more per square foot is the new norm in Toronto. This is why working with a Platinum Agent, like ourselves, is crucial to getting you the best deals. Pierre is one of the top agents in Toronto and a Platinum Broker for many of the city’s top developers.

Getting into a pre-construction launch at the Platinum price-point means you can save thousands of dollars and are privy to some of the best pre-construction deals in Toronto plus it’s always nice to get first-dibs on the best floor plans too.

*Based on 30 recent sales from top condos in Leslieville, King West, Queen West, Distillery District, St. Lawrence Market and the Entertainment District between August 2018 to October 16, 2018.