5 UNIQUE NEIGHBOURHOODS FOR A TORONTO VACATION 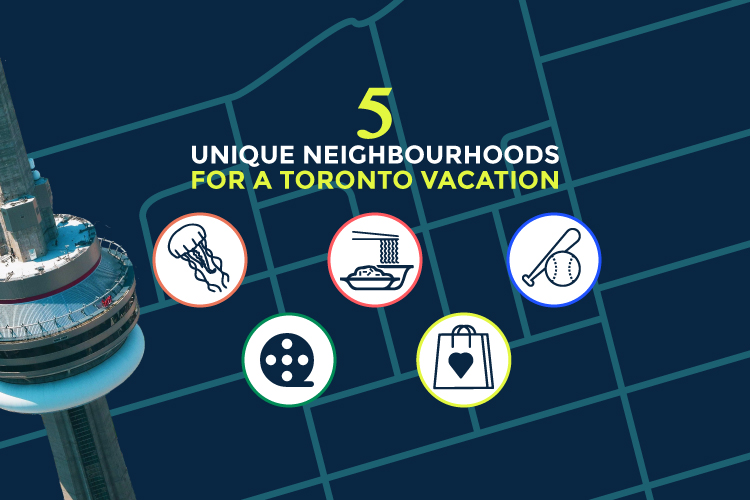 Toronto is a diverse and multicultural city comprised of an eclectic mix of local haunts. For those visiting from near and far, we’ve compiled a list of the most compelling Toronto neighbourhoods, along with a few of the attributes that make them so unique. Whether you’re a native Torontonian looking to find your neighbourhood niche, or you’re searching out the coolest spots to visit on your much-anticipated upcoming trip, keep reading to find your match-made-in-heaven.

The darling of Toronto, Roncesvalles disregards convention, retaining its small-town feel in the heart of the big city. Cyclists abound, many who live here choose to bike rather than drive, so why not see the neighbourhood like a local? Grab a bike from one of the city’s many bike share stops and cruise down Roncesvalles Ave.

Known as “Little Poland”, this neighbourhood is brimming with eastern European culture with many restaurants offering a wide array of dishes, from pierogis to golabkis (on the savory side) to the oh-so-decadent chocolate babka. If you’re all tapped out on Polish cuisine, you can explore the plethora of other top-rated eateries like Pizzeria Defina or Barque Smokehouse for your afternoon fix.

After lunch, nip in to one of Roncesvalles’ trendy boutique shops to find your next cocktail dress or take the kids to Ed’s Real Scoop for artisanal homemade ice cream before heading over to check out the much-revered cherry blossoms (only in May) at High Park. Finish the day by taking in a movie, both new and old selections, at the Revue Cinema, Toronto’s oldest standing movie theatre.

Toronto’s resident history buff, The Distillery District has wide appeal for the nostalgic connoisseur. An outstanding example of Victorian industrial design with picturesque cobble-stone streets and a smattering of historic red-brick buildings, this neighbourhood is like a portal back to a simpler time—which makes it a marvel for picture-taking.

The Distillery District is completely closed to traffic, though watch out for Segways, and has plenty to offer almost every personality type, from fervent fashionista to art critic to theatre junkie. If you’re going to make a day of it, make sure to stop into local coffee hotspot Balzac’s on your early morning meander for a “best-in-town” cappuccino made with in-house-roasted Arabica beans. And don’t forget to pay a visit to Corkin Gallery, which makes its home in a converted tank house. For those visiting in December, the Christmas Market simply oozes holiday spirit and is defined by locals and tourists alike as a “must-see”.

A rock star in the making, Yorkville was born in the lap of luxury and is largely reserved for the lifestyles of the rich and famous. Home to the luxury department store, Holt Renfrew, along with a bounty of other high-end retailers like Prada and Gucci, Yorkville is certain to put a dent in your pocketbook.

If you’re in the mood to splurge, try ‘puttin’ on the ritz’ for a late lunch at dbar or partake in a fusion of French-inspired Canadian cuisine at the neighbourhood favourite, Sassafrazz. Follow this up with a seaweed wrap at the Four Seasons spa. If you’re on a tight budget, don’t be afraid to window-shop, picnic in the park or take in the many cultural hubs this not-so-hidden gem has to offer, including several fine art galleries and the Royal Ontario Museum.

Toronto’s city jester, the Entertainment District is a wandering performer, bound to please most every palate. Sports fans and concert goers alike abound in droves around both the Scotiabank Arena (formerly the Air Canada Centre) and its open-air cousin, the Rogers Centre.

If you’re in the mood for something a little more high-brow, take in a world-class musical at one of 1000+ seat live theatres in the area or, if you’re in town in September, scoop up some tickets for the Toronto International Film Festival, a world-acclaimed cinematic event attracting over 480,000 people each year, not to mention A-list celebrities.

For those traveling with families, you can check out Ripley’s Aquarium of Canada or take in a panoramic view of the city from the iconic CN Tower. If you happen to be flying solo, dawn your finest for a night on the town at the Ritz Bar or Fifth Social Club.

The free-spirited bohemian, Kensington Market is a walkable neighbourhood that is as laid-back as it is downright homey. This local hub draws in all types, with pockets of artists and buskers interspersed with pony-tailed hipsters. Tourists on mini-vacations and seasoned backpackers alike flock to the area to “find themselves” among the trendy bars, cafes, and international restaurants in the area.

If you happen to visit Kensington Market, make sure to take a break from perusing the many indie shops and vintage boutiques along the tree-lined streets to grab a bite at local favourites, Rasta Pasta and The Burgernator. And don’t forget to hold your breath if you pass through any suspicious plumes of smoke, or you might come down with an unexpected case of the munchies. 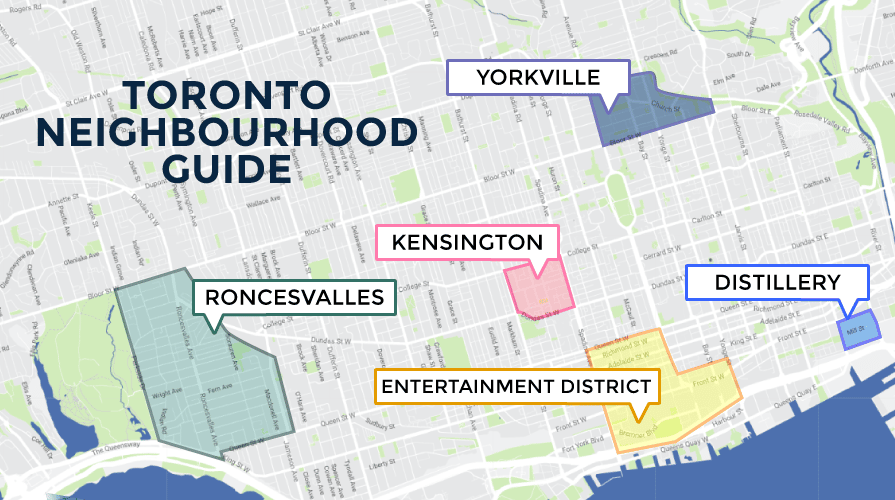