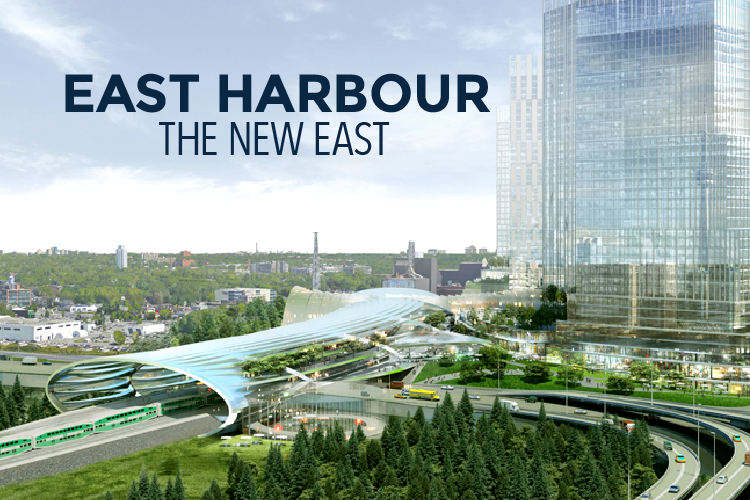 Check out these artist renderings of the new East Harbour development in Toronto! Looks like the south-east core has a sexy new future in the works. Currently Canada’s largest commercial development, First Gulf is essentially creating a new Toronto neighbourhood. It’s like a city within a city: office and retail spaces, parks and public spaces, restaurants and a huge new transit hub. Nothing has been forgotten!

East Harbour will occupy the space bordered by the DVP, Lake Shore BLVD, Booth Avenue and Eastern Avenue. What was previously the Unilever industrial site, this 60 acre plot is soon to be home to a massive new mixed use space. And when I say massive, I’m talking 12 million square feet massive. 10 million square feet is allotted for office space and 2 million for retail (as a comparison, the Eaton Centre is 2.15 million sqft). This mixed use space is expected to bring 50,000 new jobs to the area, underscoring Toronto as the ‘Silicon Valley of the North’. 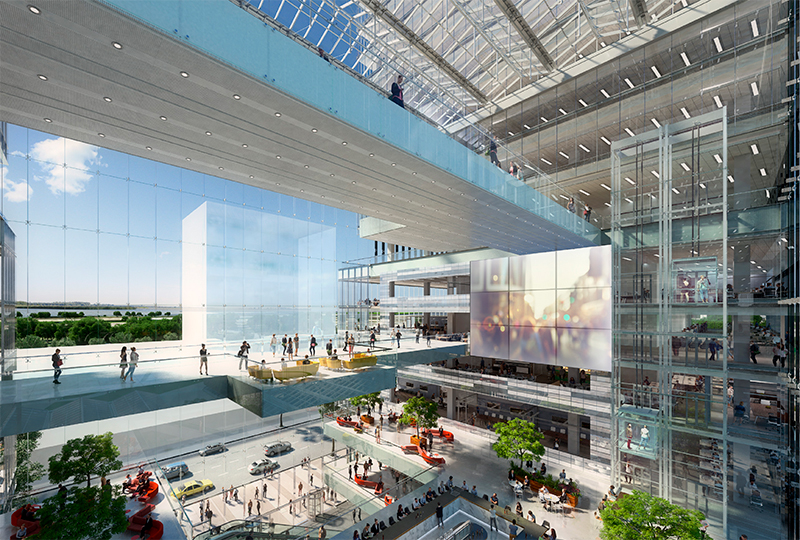 Let’s talk transit. The city is finally preparing to add that downtown relief subway line we’ve all been hoping for. This, along with a few other transit improvements, are all slated to weave through East Harbour making it one of the city’s major transit hubs. The proposed design depicts a huge arched glass ceiling that covers three major transit lines, street and bike lanes. At the very top there are bike lanes with current and additional GO Transit Lines just below. A Broadview LRT extension along with regular traffic sits below that and the subway relief line below it all. Seem excessive? With 50,000 new jobs and countless visitors to the area, the infrastructure is well needed. We’re just happy the city planned accordingly this time around.

While this may be the largest project to date, the downtown east is no stranger to revitalization. With Regent Park spearheading the area facelift in the early 2000s, we’ve now seen a residential boom begin in Toronto’s downtown east. Major area improvements from the Pan-Am games in 2015 led to the updates in the Canary District followed by the stunning architectural gems that sprouted up just west of the future East Harbour location as part of the recent River City condo developments. 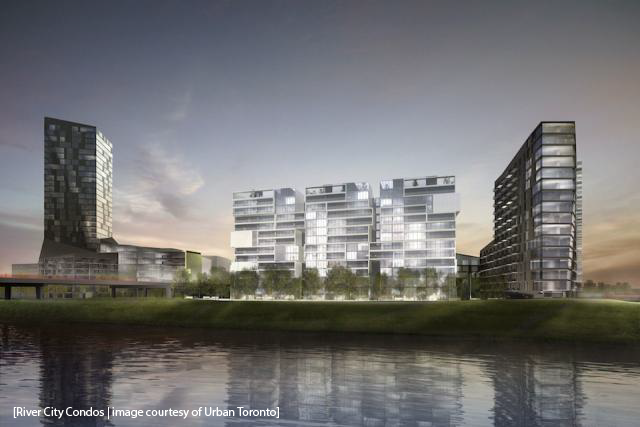 There have been a number of new residential developments in this area over the last several years, many still in construction. If you’ve invested in this area recently, the addition of the East Harbour development is sure to benefit. Thinking about investing in pre-construction? We’ve got a few lucrative options on the horizon including Riverside Square. We’ll get you VIP early access to the hottest pre-construction investment opportunities. Register as an Insider and we’ll send you the updates straight to your inbox. Register today!