HOW TORONTO’S HOMEOWNERSHIP RATE COMPARES TO OTHER MAJOR CITIES

Toronto is Canada’s largest city but compared to the U.S. our rate of home ownership is still much higher than their best performer. Read on to find out more about renting vs owning in Toronto’s real estate market.

At a time when owning a home in Toronto may seem like an impossible goal, you may be surprised to learn that the homeownership rate in Toronto is, in fact, quite healthy. Toronto is Canada’s largest city and compared to the United States’ five largest, our ownership rate is still 12% higher than their best performer, Philadelphia. Toronto’s homeownership rate is 66.5%, a mere 1.3% below our national rate of 67.8% — but it is slowly declining. On the other hand, so are most major cities in comparison. 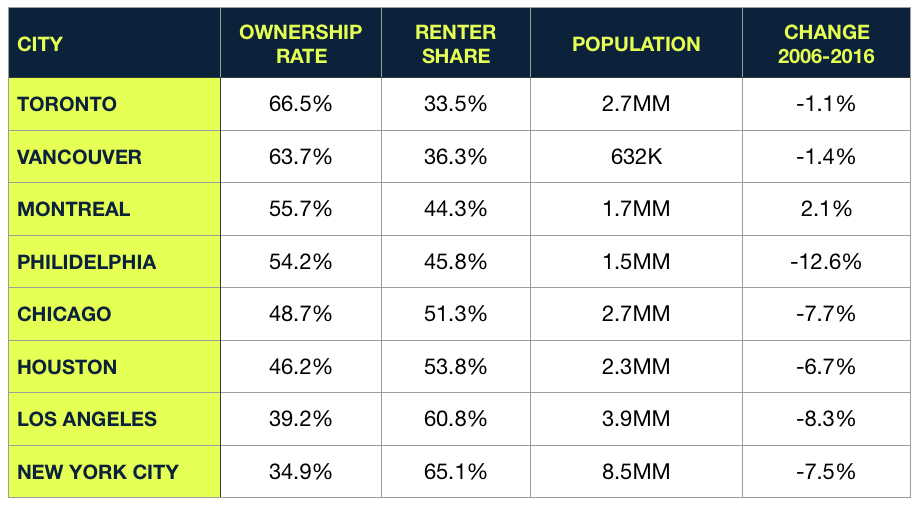 Homeownership Rates in Major Cities based on 2016 Census Data

While there’s no denying that the 2008 housing crisis south of the border is in part to blame for the lower comparative homeownership rates, it should be no surprise that what’s happening in the States’ largest cities is what is expected to happen in the coming years for Toronto: the growth of the renter population.

“Having a larger stock of rental (usually multifamily) housing helps provide the flexibility required to absorb the young people and mobile talent that fuel their economies.” [1] Toronto is the new kid on the block, so to speak, growing as a world renown city and for that reason we can expect the homeownership rate to start its decline and the share of renters to quickly increase.

But this is normal!

Major cities are always going to be more costly to live in but they also offer more opportunities, slowly luring those from other provinces and into their housing market. Toronto is said to be the Silicon Valley of the north but when it comes to home prices, we are way below the curve.

THE BEST TIME TO INVEST

One of the many reasons we encourage people to invest in Toronto real estate is for the reason above. While prices have been soaring, especially in the Toronto condo market, they’re still underpriced compared to other world class cities. And guess what? Toronto is a world class city. Named the fourth city on the list of The Most Liveable Cities according to the Global Liveability Report, continues to rank in the Top 5 of the Economist’s Most Liveable Cities, and ranked seventh on the list of 2017’s World Happiness Report. More recently, Toronto made the Top 10 list of Future-Proofing Cities in the world. Getting into the Toronto real estate market today will earn you significant equity as the prices climb towards comparable cities like New York and Los Angeles.

With a growing number of renters in Toronto and the extremely low vacancy rate we currently have, investing in pre-construction Toronto condos is a great way to add to the much needed rental supply. It’s hard to keep up with the increasing demand for rental inventory but without the help of investors there’d be far fewer units being added to alleviate the strain on the rental market. According to a study by Ryerson last year, more than half of the 105,000 condos being developed in the GTA were investor-owned.

The long and the short of this is that while it’s harder than ever to be a homeowner in Toronto, you’re living in a city that is quickly gaining recognition on the world’s stage. With that the prices will rise and the number of renters will begin to exceed that of homeowners. If you have the means to get into the market now while prices are still reasonably priced compared to world class U.S. cities — you are getting one hell of a deal. But hey, that’s just my educated opinion.