FROM EAST TO WEST: TORONTO NEIGHBOURHOODS TO WATCH IN 2019 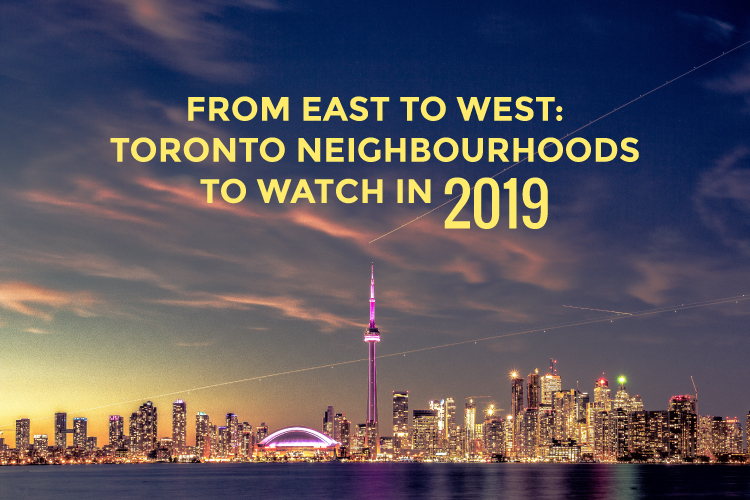 UP AND COMING TORONTO NEIGHBOURHOODS IN 2019

As an investor in Toronto real estate, the best way to make long-term gains is to track gentrification and recognize what’s trending before it’s hot. I’m like the Anna Wintour of real estate, especially when it comes to finding you an affordable Toronto neighbourhood.

Related: Read about gentrification in Toronto neighbourhoods and the “Starbucks Effect”.

Gerrard Street East is what Leslieville was ten years ago. This up and coming Toronto neighbourhood has seen major transition and gentrification over the last year with new storefronts and restaurants along Gerrard Street East — and it makes sense. It’s smack dab in the middle of the Danforth and Queen Street East, both of which have accessible transit lines and much to offer.

Update: In May of 2019, about 5 months after writing this post, Blog TO released this article, “Gerrard Square mall suddenly finds itself on one of Toronto’s trendiest streets“. When it’s picked up by BlogTO you know the neighbourhood is definitely on Toronto’s new watch list!

In our blog about gentrification we said, “one of the best ways to tap into growing residential markets is to target areas that are a couple of blocks away from the go-to hot spots that are already developed, in demand, and selling for top dollar.”

With Leslieville as the it neighbourhood of Toronto’s east end, it’s no surprise that restauranteurs and shop-owners are looking at Gerrard Street East to set up shop. And they’re wise to do so. The real estate is still affordable compared to other neighbourhoods.

There’s also lots in store for Toronto’s east end in general with the development of East Harbour coming to the old Unilever site and talks of a new transit stop at Gerrard and Carlaw. If all goes as planned, this stop will serve both GO Transit and a new subway relief line and will bring more growth to the area. You can read more about Toronto’s upcoming transit plans in “Why You Should Invest in Toronto Real Estate: The 20 Year Transit Plan ”.

One of our next up and coming Toronto neighbourhoods is East Danforth. Recently ranked number four by Toronto Life’s neighbourhood guide is the Danforth. Areas along transit lines are always bound to bring new development and much of the subway’s east end is still untapped making it an affordable neighbourhood for buyers who’d like to find a home along the subway line.

There’s basically zero current inventory available along the Danforth as it pertains to condos. When you couple this with the intrigue and buzz of the Danforth it really is one of the hottest up and coming neighbourhoods Toronto has to offer in 2019.

Over the last year a few new developments have sprung up with a number of additional planned developments expected to come to fruition over the next 4 years, many hitting the east end of the Danforth. It’s only a matter of time before you start seeing more of these residential developments here.

Last year we sold Platform Condos at Danforth and Greenwood. This pre-construction launch sold out fast and many of our investors had profit built in on signing. It’s opportunities like this that I advocate for.

When it comes to investing, my clients expect tenured advice and appreciate that I have my finger on the pulse of the Toronto real estate market. I advise on projects with which you can achieve good margins and buildings that I anticipate will have great returns. You can see some of my clients’ returns here. 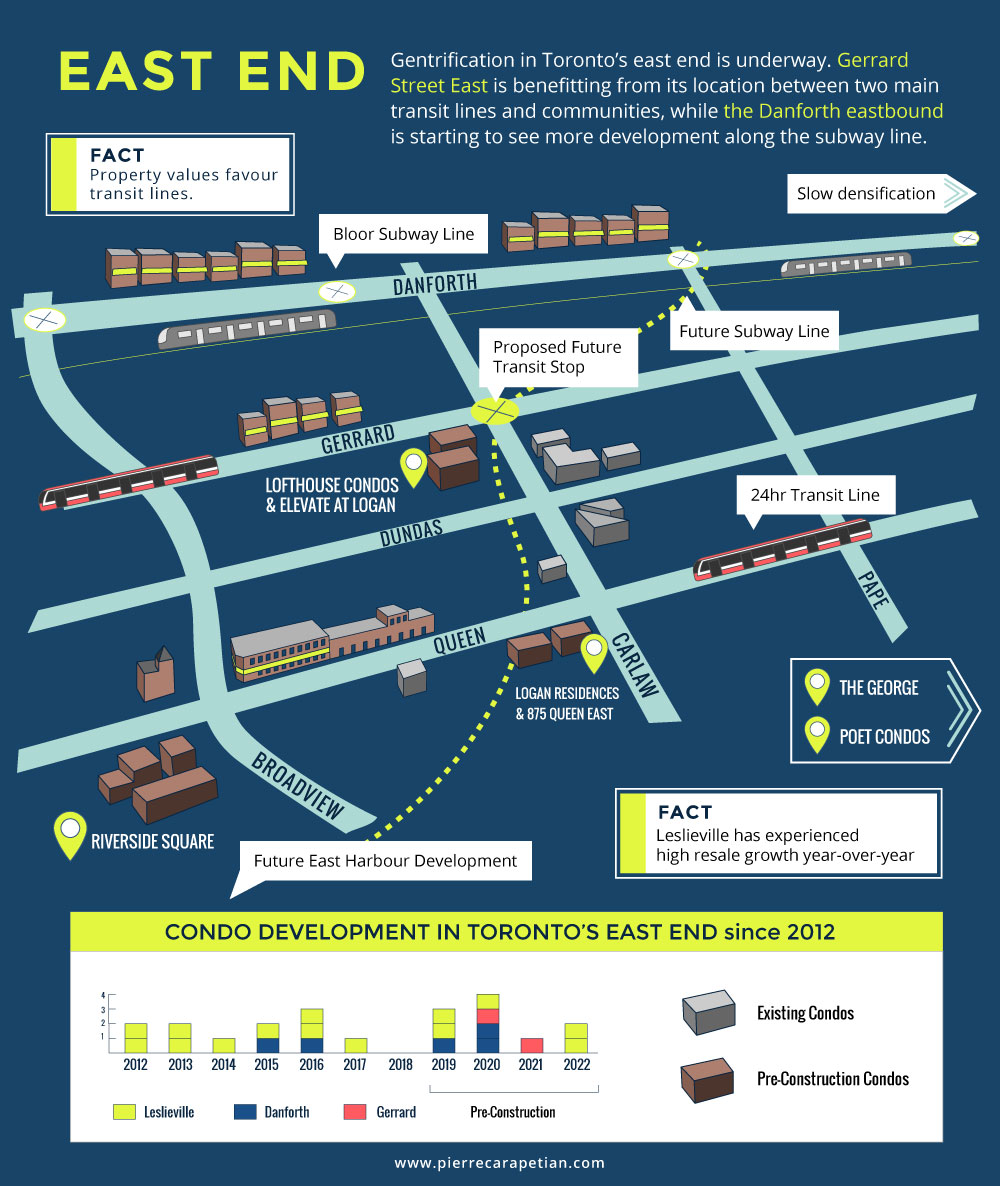 As we mentioned, there are big plans for transit in the east end. In addition to the stop at Gerrard and Carlaw, the subway relief line will also connect at Pape Station and bring you into the downtown core in a fraction of the time. Homes around areas that are set to become more accessible by transit have already begun to see high resale price growth.

Like I said, the east end has room to build, in particular, areas east of Pape. To ensure you’re always in the loop, become an Insider and you’ll get all of the hottest pre-construction launches sent right to your inbox.

Following a similar trend eastbound is the redevelopment happening along Kingston Road in the neighbourhood of Birch Cliff. With its close proximity to the Beaches, it’s a natural progression of gentrification. Already this year we have four great pre-construcion project launches underway for the Birch Cliff neighbourhood: Terrasse at the Hunt Club, Merge Condos, Clonmore Urban Towns, and Birchcliff Urban Towns.

The area is already highly residential and the developments there are maintaining the charm through boutique condos and urban townhomes. A large part of the appeal to Birch Cliff is that it is still very affordable for an area that is only a 20 minute drive to downtown. Clonmore Urban Towns, for instance, has three bedroom townhomes in the $600’s. You just can’t find that price in Toronto anymore.

With the handful of these pre-construction condos that are planned for the neighbourhood, new retail will follow and more development will continue to grow the area. If you’re looking for family-sized condo, the Birch Cliff neighbourhood is the most affordable opportunity Toronto has by far.

Over in the west end of Toronto I’ve got my eye on Bloor West between Dovercourt and Lansdowne. With Ossington being the trendiest street of the city’s west end, the bars, cafes, and boutique retailers are overflowing west of Ossington. Much like Leslieville is bringing life to Gerrard Street East, Ossington is doing the same for this up and coming Toronto neighbourhood at Dufferin and Lansdowne.

The corner of Bloor and Dufferin is expected to get a major face-lift. Capital Developments is planning to transform the area by adding new retail and office space, lots of greenspace, and over 2,000 residential units. They’re designing with families in mind. There will be five mixed-use towers all with designated residential space, 62% of the units will be two bedrooms or larger.

Read more about the Bloor and Dufferin project here

Making the area more accessible is always a bonus too. Already located along the subway line, the area is also very close to the Bloor GO Station which services the Union-Pearson Express. You can get to Union Station in seven minutes from here. They’ve also proposed a future GO Station at Lansdowne and Bloor.

Just north of Bloordale Village along Dupont Street is one of our next up and coming Toronto neighbourhoods or rather ‘area’ to watch for. The city has approved the plans for the redevelopment of the Galleria Mall at Dupont and Dufferin. This roughly 853,000 square foot site will bring eight new residential towers. Of the 2,846 condos being added, 150 will be designated for affordable housing and 50% will be two bedrooms or larger.

In addition to new retail, office space and a new and improved 7,500 square foot community centre, they’re designing Point Plaza, a centralized gathering space. We’ve seen this trend in residential projects like Riverside Square coming to Leslieville as well as Mirvish Village and the redevelopment of Bloor and Dundas. Developers are building residential communities, not just condos. 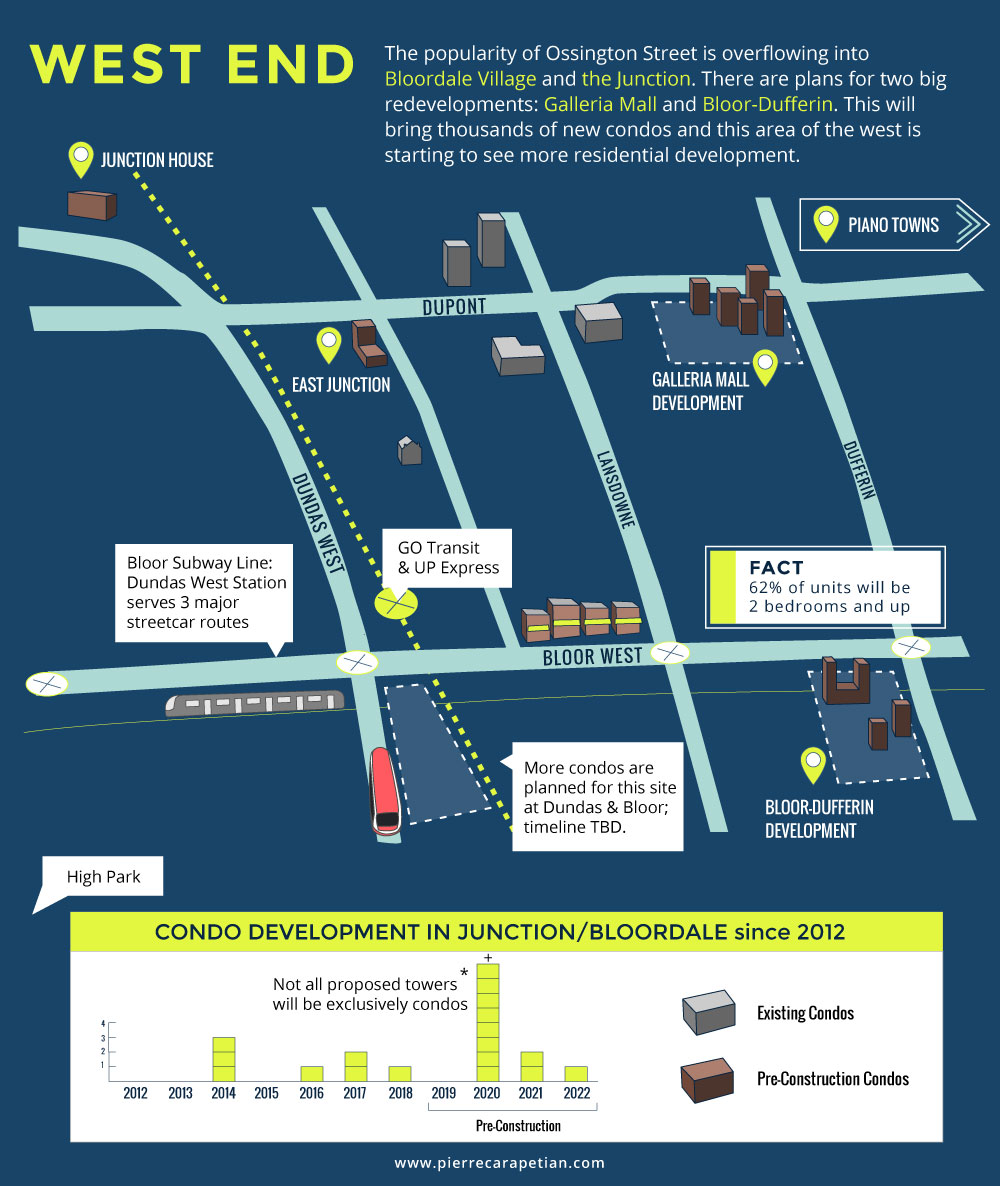 We’ve begun to see condos coming to the west end of Dupont Street. Last year Fuse and Fuse2 Condos took occupancy just down the street from Galleria Mall and this past year construction began on Bianca Condos. Other than that, there really isn’t much in the way of condo inventory for this area.

When East Junction Condos launched at the end of the summer, it was very popular among investors. Similar to Platform Condos on the Danforth, adding new inventory to an area that’s only just starting to show signs of gentrification, the prices to buy at East Junction were the best in the city at the time.

With its proximity to the Junction and Bloordale Village, I’d keep my eye on new developments coming to this area next year. Remember, it’s about recognizing where the growth will be ahead of prices rising to match the already established Toronto neighbourhood values.

If you’ve been thinking about investing in pre-construction in 2019, sign up as an Insider and you’ll get all of my hand selected pre-construction projects sent right to your inbox. I always look for the projects that are primed for profit and will never advocate for something that I wouldn’t buy myself.