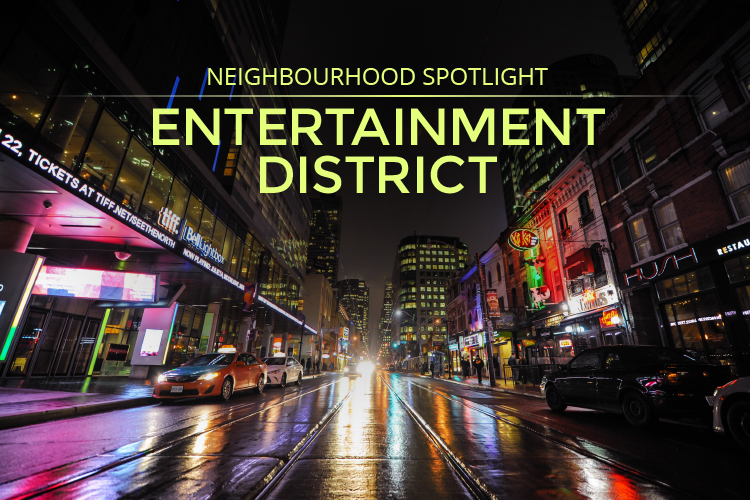 At Pierre Carapetian Group Realty we specialize in Toronto real estate. Our favourite thing about our hometown is that there is absolutely a neighbourhood for everyone. This week we’re zeroing in on this notion and putting the spotlight on the Entertainment District. Not only is this neighbourhood full of life, it truly has something for everyone, or maybe all of your personas. You can cheer on one of your favourite sports teams from the sidelines one night and escape from it all at the Toronto Symphony Orchestra the next. No matter what you’re after, the Entertainment District’s sure to have it.

Put on your pearls or tuck in that pocket square because you’re heading out to find that perfect vintage wine to pair with dinner and pick up that new subtitled movie. Baby, you classy AF.

Seriously, though. If you enjoy the arts there is no better place to be than in the heart of it all.

It’s kind of like your very own piece of Broadway as you walk along King between Simcoe and John Street. The Princess of Wales Theatre and North America’s oldest operating theatre, the Royal Alexandra, have a constantly rotating bill of incredible shows and musicals, many of which are coming right from Broadway. If your mom or aunt are visiting from out of town this is a great option for a night out in the big city.

If the theatre’s not your thing, just cross the street to Roy Thompson Hall and experience the Toronto Symphony Orchestra (TSO). Looking for a good date night idea that will definitely impress? This is it. Get all dolled up and head to the TSO, who often screen popular movies with the symphony playing the movie scores live.

In addition to these more traditional affairs, on the corner of John Street is the TIFF Bell Lightbox, which is headquarters to the Toronto International Film Fest. Dominated by celebrities during the first half of September, this cinema has five screens featuring contemporary films, old classics, and documentaries. While you’re there, hit up the LUMA Lounge which has Magic Hour every weekday from 4-9pm featuring half price martinis, manhattans, beer and sangria! You don’t need a film to convince me to take advantage of that deal.

FOR THE PATIO HOPPER

While we’re on the topic of cocktails, take advantage of the many patios throughout the Entertainment District. At the base of TIFF is O&B Canteen with a generous sized patio right on the vibrant King Street West. Around the corner on John is Figo, which has an even bigger patio and is a quiet alternative to the King West stretch.

John Street acts as the main corridor of the Entertainment District. Following it is like following the yellow brick road… if Dorothy were looking for a stiff drink and a sick patio. Two notable rooftop patios in the area are Mascot Brewery, with lots of picnic tables and astroturf for that beer garden vibe, and the more recent addition, The Porch. Not far away is Bar Hop — a place so popular they had to open two in the neighbourhood. Their second location on Peter Street has a great rooftop patio and 36 rotating taps. If you manage to grab a table on their patio, you’ll want to stay for a while so make sure you order something off of their delicious menu so you don’t get too tipsy.

The Entertainment District is a foodies’ paradise and it certainly lives up to its name. Clearly dubbed the Entertainment District for a reason, this neighbourhood offers everything you need for the perfect night out on the town just footsteps from your front door. You’re getting the full package deal: pair your show with dinner at the city’s hottest restaurants. A very popular spot is Momofuko. This restaurant, attached to the Shangri-La, has a hierarchy of dining experiences within it. The first is their delicious Noodle Bar, you can’t go wrong with any of their amazing ramen dishes or pork buns. Head to the mid-level for the slightly elevated lounge version of the Noodle Bar where cocktails and sake are offered. If you’re looking for something a bit more unique and exclusive the top floor offers your very own personal chef, ready to put on a show.

This is just the tip of the iceberg when it comes to dining in this neighbourhood – there is something for everyone’s budget and palette. Catch the game over some nachos at Wayne Gretzky’s or feel like you’re on the coast at Rodney’s Oyster Bar.

FOR THE SPORTS FANS

Head south on John Street and you’ll find another Toronto icon chumming up to the CN Tower and gracing our skyline: the Rogers Centre (aka the Skydome). The home of the Toronto Blue Jays is a huge draw for many. Regardless if you are a resident or tourist, a baseball fan or not, there’s nothing like a good old fashion ball game at the Rogers Centre — and when the dome is open, it’s an entirely different experience! This area is absolutely buzzing with sports fan excitement.

Bremner Boulevard is where you can walk from one game to the next in under 5 minutes. In fact, the boulevard was created to connect the Rogers Centre to the Air Canada Centre in the late 90s. It was actually the Raptors that spearheaded the construction of the Rogers Centre which is now home to the Toronto Maple Leafs as well. This neighbourhood is a sports fan’s dream. If you frequent the Air Canada Centre) for games or their many concerts, get ready for a big change. Much like the Rogers Centre is still frequently referred to as the Skydome, Scotiabank just paid $800 Million for the naming rights to the popular arena, which takes effect next July. (It will always be the ACC in my heart).

The problem with this part of the Entertainment District is the more south you go — in other words, the closer you get to the CN Tower — the closer you fall victim to the tourist-dense streets. But living in a city as incredible as ours [voted #4 most livable city by the Economist] that’s just the price we’re willing to pay.

Speaking of prices, the area’s residential real estate market has seen impressive growth over the past 5 years. It wasn’t all that long ago that the re-zoning of commercial buildings around King and Spadina led to a boom of residential lofts, followed by a rise of condo and townhome buildings. Prior to this, residential options were pretty limited but now everyone wants a piece of what the Entertainment District has to offer.

Since 2012, condo prices have risen 49%, with a huge increase in property values occurring over the last year. For instance, the average sale price this same time last year was $486,457 compared to today’s $634,479. That’s a 30% spike in a single year. The Toronto condo market is hot and it’s something the Entertainment District does well. There are a few great pre-construction properties on the horizon in this neighbourhood, most notably is Peter and Adelaide. The location of this property means you get the best of both worlds: you’re in the heart of all the excitement without being too immersed in tourist town. Peter and Adelaide is right on the cusp of the Entertainment District and beautiful Queen West. Location, location, location.

The area has been attracting young professionals looking for a convenient home base where they can still live it up at night. While the city has some of the highest rental prices in the country right now, with one bedrooms renting for an average of nearly $2,200 a month*, people are willing to pay to be in the heart of it all.

Whether you’re visiting the city and looking for that authentic Toronto experience or are a true Torontonian through-and-through, you’ll never be bored in the Entertainment District. This neighbourhood has become a place where people can truly live, work, and play.

*based on 4 current rentals at Peter Street Condos on condos.ca