HOW THE BENTWAY IS BRINGING 7 TORONTO NEIGHBOURHOODS TOGETHER

Last December the city turned a 1.75km route below the Gardiner Expressway into a multi-use trail that connects seven city neighbourhoods. Now this new urban space is bringing Torontonians together. 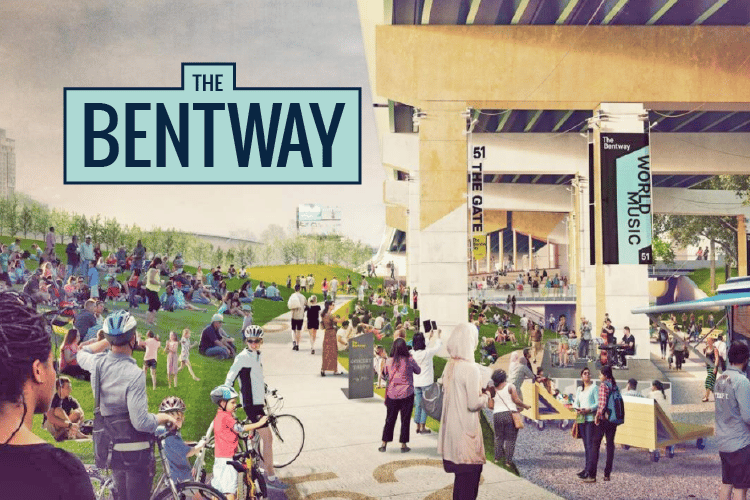 Great urban design knows how to maximize city space, turning single-use urban structures like overpasses in multi-purpose public spaces. The Bentway, an exciting city project that opened to the public last December, has given new life to the once empty space below a section of Toronto’s Gardiner Expressway.

The Gardiner has been quite the hot topic in the news over the past couple of years because it’s quite literally been falling apart. When Toronto City Council announced that they were committed to rehabilitating the Gardiner, Judy and Wilmot Matthews generously donated a whopping $25-million to renovate the surprisingly beautiful vacant space below the expressway. While it’s common for institutions like schools and hospitals to receive charitable funding, The Judy and Wilmot Matthews Foundation have made several donations over the years with a focus on developing and improving public spaces around the city.

The name for the Bentway, which was put to a vote over a 3 month period, comes from the bents which are the column and beam structures that support the Gardiner and, in essence, frame the space below. The plan for the Bentway, which kick-started in March 2017, was to develop a 1.75km route below the Gardiner Expressway into a multi-use trail that connects seven Toronto neighbourhoods: City Place, Wellington Place, Bathurst Quay, Fort York, Niagara, Liberty Village and Exhibition Place.

With its proximity to these seven Toronto neighbourhoods there’s said to be about 70,000 people within a ten minute walking distance of the trail. Book-ended by Strachan Avenue and Spadina Avenue and following the original shoreline of Lake Ontario, the Bentway connects and engages communities by offering year-round activities and events. They’ve even instituted a new not-for-profit organization, The Bentway Conservancy, which serves as the administration behind the space and strives to create a unique public space committed to accessibility and community participation. 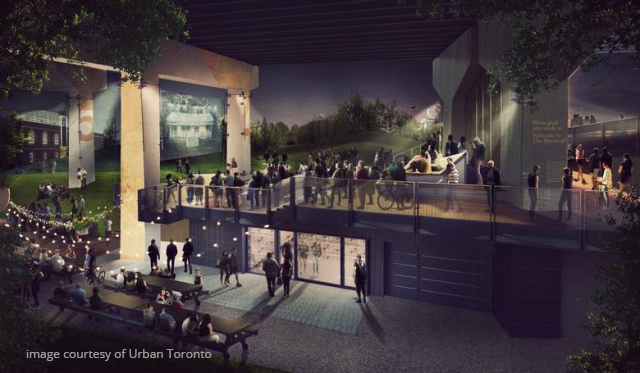 Urban designer, Ken Greenberg, in collaboration with Public Work, successfully designed the trail that offers people a new way to move through the city. Showcasing the sections along the path as urban “rooms”, this 5-storey underpass houses recreational amenities, a skating rink + building, gardens, theatres and so much more.

The first phase, which opened in December, includes a lawn amphitheatre with seating for 500 extending from the Fort York Visitor Centre, a skating trail building and an open performance space with bleachers to seat 250 people at Strachan Avenue. In early 2018, the smaller (though extensive) details such as lighting, furnishing and remaining landscaping were completed and different phases of new art spaces and park infrastructure have been rolling out all year.

Despite having one of the coldest winters in recent history — or so it seemed — there were many brave souls that took advantage of the Bentway’s 1.75km long ice rink with weekly events and DJs setting the vibe for each skate. Those who live in the immediate area could even opt to skate to work if they were so willing.

There are seasonal events always taking place at the Bentway. From January through to March there were a series of different art exhibitions and installations and even workshops like pop-up skate instruction for those who were interested.

This summer they are celebrating skateboard arts and culture from June 30 through to August 2, turning the ice-skating rink into a skatepark. They kicked off the celebrations on Canada Day weekend introducing a new art installation that features skateable sculptures. Throughout the summer they will also have skateboard-related workshops from videography to designing skatedecks. For a full schedule of the different workshops visit The Bentway’s Event Calendar.

From day one the project has had massive support from the community, including Mayor John Tory himself who had helped to expedite the process. With all of the bad press that the Gardiner has been getting, it’s nice to see some actionable improvements getting prioritized for its underbelly. For all of you living along the Bentway stretch, make sure you swing by and see what festivities are on the go.

For more on the Bentway or if you’re interested in becoming involved in the project, visit www.bentway.ca