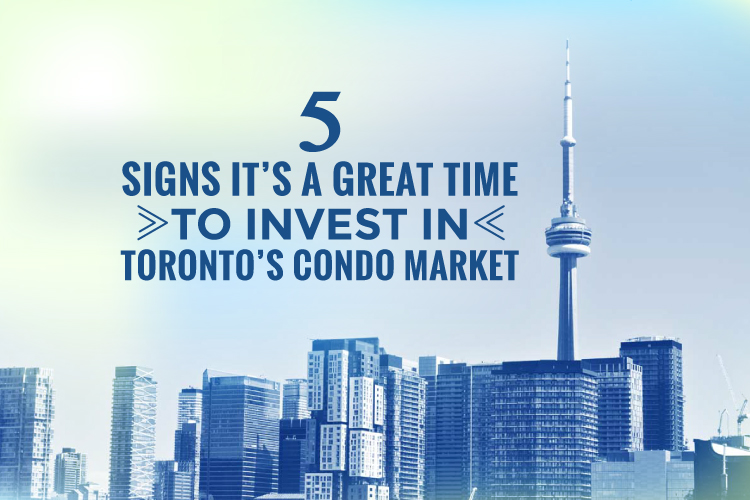 Toronto is a growing city on the fast-track for stardom and when a city experiences growth the way Toronto has over the last decade, this inevitably puts a demand on its housing market. The increase in population is a reflection of how incredible our city is and despite the steady climb of home prices in Toronto, we are still far behind home prices of other major cities. With this in mind, here are five signs it’s a great time to invest in Toronto’s condo market.

1. CONDO PRICES ARE HIGH AND CLIMBING

With the prices in the detached and semi-detached markets exceeding affordability for most first-time buyers, Toronto’s condo market is in high demand. Condo prices have been steadily climbing but remain the most affordable option.

Homeowners and investors who’ve purchased a condo in the last few years have experienced incredible equity on their purchases. Historically, the real estate market sees a 4-5% growth rate per year but in the last few years downtown Toronto condo prices have seen the average condo price jumping upwards of 20% in some municipalities in a single year.

Have a look at how the downtown Toronto home prices over the last five years continue to outpace the historical average.

Condo prices are expected to continue climbing which means the best day to invest is today, because they’re only going to be more costly tomorrow. The sooner the better is definitely true when investing in Toronto’s condo market. If you’re waiting for prices to drop before getting into the market, think again. Get in now to get your money to start working for you.

Read “The Best Day to Buy Real Estate is Yesterday”

2. TORONTO RENTAL PRICES ARE AT AN ALL TIME HIGH

Toronto’s rental market is hot! With the extremely low vacancy rate, the competition for rentals is at an all time high with bidding wars taking place among renters. Gone are the days of getting a one bedroom rental in downtown Toronto for less than $1,800 per month.

Investing in the Toronto condo market means you are able to earn significant rental income from your tenants. Investing in the pre-construction condo market in particular gets you further ahead because it requires less up front with an added bonus of an HST rebate of up to $24,000 when you lease the property for minimum one year.

Download our Pre-Construction Investment Guide for the details and benefits affiliated with this type of investment.

3. TORONTO HAS BIG PLANS FOR TRANSIT

We know first hand that properties on Toronto’s transit lines sell for higher than their less accessible counterparts. The areas set to become more accessible by transit have already begun to see high resale price growth.

Similarly, keep your eye on pre-construction opportunities along the east end of Toronto’s Bloor-Danforth subway line where there is still lots of room for development. One of our investors who purchased at Platform Condos last fall is already seeing a 20% return on his investment.

Click here to see more of our client returns.

4. TORONTO IS A WORLD CLASS CITY

Toronto has been building a positive reputation for itself over the last several years gaining recognition the world over. Consistently ranking in the top 10 Most Liveable Cities according to the Economist’s Global Liveability Report and recently made the Top 10 list of Future-Proofing Cities in the world.

In the age of technology, Toronto has become known as the ‘Silicon Valley of the North.’ With our lower dollar for high-caliber tech employees, it’s no surprise that global companies are drawn to Toronto as a place to do business.

According to Robert Half Technology, the tech employment rate is growing four times faster than the overall employment rate in Canada. This tech job growth is most prevalent here in Toronto which recently ranked highest in Canada for tech jobs and fourth among Canada and the United States.

One thing to remember is that the real estate market is cyclical. The boom in Toronto’s tech industry means more jobs are being created which drives demand for more residential real estate and positive price growth.

Canada’s high quality of living — Toronto ranks 16th in the world — is attracting migrating foreigners to our wonderful city. The Toronto Region’s population base is one of the fastest growing in Canada.

Toronto has more than twice the proportion of recent immigrants (8.4%) as Canada (3.5%) with approximately two million more expected by 2023. Investing in the Toronto condo market is a great way to add to the much needed rental supply.

It’s hard to keep up with the increasing demand for rental inventory but without the help of investors there’d be far fewer units being added to alleviate the strain on the rental market. According to a study by Ryerson last year, more than half of the 105,000 condos being developed in the GTA were investor-owned.

When you’re thinking about investing, think about what the city’s future holds. With several large commercial developments, massive transit plans on the horizon and our steady population growth, Toronto’s condo market is ideal for investors to see great returns. Toronto is a world class city but compared to other world class cities in the U.S.— and frankly, anywhere in the world — you’re paying less per square foot.

Toronto’s condo market is primed for profit, investing today will only benefit your future wealth. If you’ve been thinking about getting into the pre-construction condo market, book a call with me today and we can discuss the best options for you and how to start building your real estate portfolio.