This month The Danforth hosted the 24th annual Taste of The Danforth, a highly popular festival that shuts down a stretch of The Danforth from Broadview to Jones Avenue. The festival, which garners well over a million [1] visitors over the course of the weekend, celebrates Toronto’s diversity by way of mouth-watering Greek, Thai, and Indian cuisine – and that’s just the beginning.

While Toronto’s Danforth area attracts a lot of people during the festival, this neighbourhood has been attracting an increasing amount of new home buyers over the last few years. The area’s comparatively low home prices has led to an influx of new homeowners looking for more space — both inside and out — at a more feasible cost. The low prices however that have been found in the neighbourhoods that surround the main stretch of The Danforth will likely see a substantial increase in the coming years.

The Danforth is going through a similar gentrification to that of Leslieville and Riverdale about five to ten years ago. These areas started attracting residents with higher household incomes and with that, more boutique retailers, cafes and bars started to appear on the scene. Incredible growth in Leslieville attracted some developers to build what are now highly popular condos and the area is now one of the city’s most sought after neighbourhoods. One of these popular condos is The Carlaw, pictured below, and is located at the corner of Dundas and Carlaw. According to condos.ca the Carlaw has an 14.9% average increase in value year-over-year. 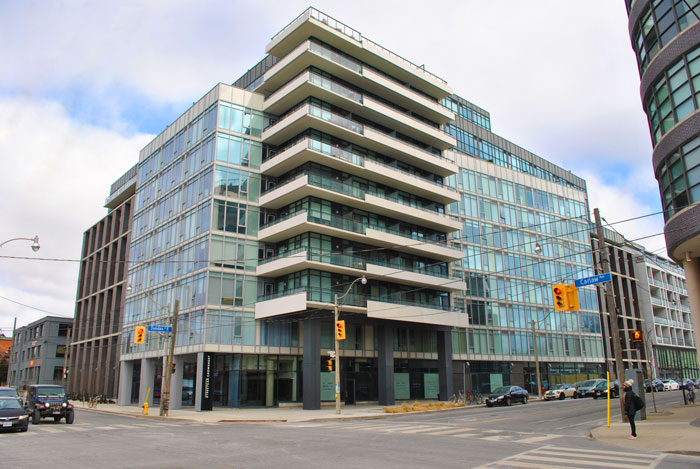 The Carlaw (built 2015) in Leslieville

In 2015, when a Starbucks was added to the Danforth just east of Greenwood, this BlogTO article talked about the Starbucks Effect as evidence that an area is gentrifying, which inevitably has a positive impact on the value of real estate in that vicinity. This was certainly the effect in Leslieville and now, two and a half years later, there’s proof in the numbers for the Danforth.

In 2013, the average home price in the Danforth and Greenwood area was $562,979. Today, the average home price stands at $876,515. That’s an increase of 56% in just four years. The Danforth is an attractive neighbourhood as it is directly along the subway line which draws new retailers and development. Residential price growth also favours properties on transit lines. With The Danforth’s sheer proximity to the highly popular Riverdale and Leslieville neighbourhoods, the area is becoming increasingly desirable. This month it was announced that Platform Condos, a new boutique style condo development, is being added to the corner of Danforth and Greenwood. Currently, the area has little to no residential inventory like Platform Condos which means this is going to be a hot property for investors and buyers alike. With the value increases we’ve seen in the last four years, there’s no doubt that the property values in this area will continue to climb.

The beautiful tree-lined streets of the neighbourhood are attracting more and more young families and new homebuyers. Young families have been flocking here for more reasons than just the price alone. The neighbourhood offers a plethora of schools and parks that seem to be on every other block. Between Donlands and Coxwell along the Danforth there is an incredible selection of restaurants and bars offering incredible dining experiences, many of which offer a vast array of local beers.

Speaking of local beers, Left Field Brewery has become a neighbourhood staple. Located just south of the Danforth off Greenwood Avenue, the small microbrewery is regularly filled with local residents, many of whom show up with strollers in tow. The community here has a small town feel. Charming is certainly the word the comes to mind.

If you’ve been thinking about buying or investing, you may want to consider making the east end your home. Use our East End search engine to find the latest listings within your budget!