Skip to content
Home » BLOG » THE WELL: A NEW FUTURE FOR TORONTO’S FRONT STREET
Previous Next

THE WELL: A NEW FUTURE FOR TORONTO’S FRONT STREET

Change is in the air down at Front and Spadina. We’re taking a look at new development The Well: a multi-faceted development that will serve as a spectacular one-stop-shop community.

Change is in the air down at Front and Spadina with the must anticipated addition of The Well Toronto. If you’ve been by in the last few months, you’ll see many cranes rising from the north-west corner where the Globe and Mail has stood for the past 43 years. Ten years from now this part of the downtown core will be completely transformed. First the Bentway, more recently Stackt container market, and talks of a possible Spadina GO station in the future — there are lots of minds working on the future of Front Street.

Adjacent to two residential communities – Fort York and City Place – this condo-dense area could favour some extra joie-de-vivre. The intention of the designers and developers is to provide a place where you can live, work, and play…well. The materials used are inspired by the King West neighbourhood using steel, natural wood beams, and exposed brick – not a far cry from the lofts of the area. There is also a huge European influence in the design, creating an open-air market of shops and restaurants interconnected through pathways and bridges. 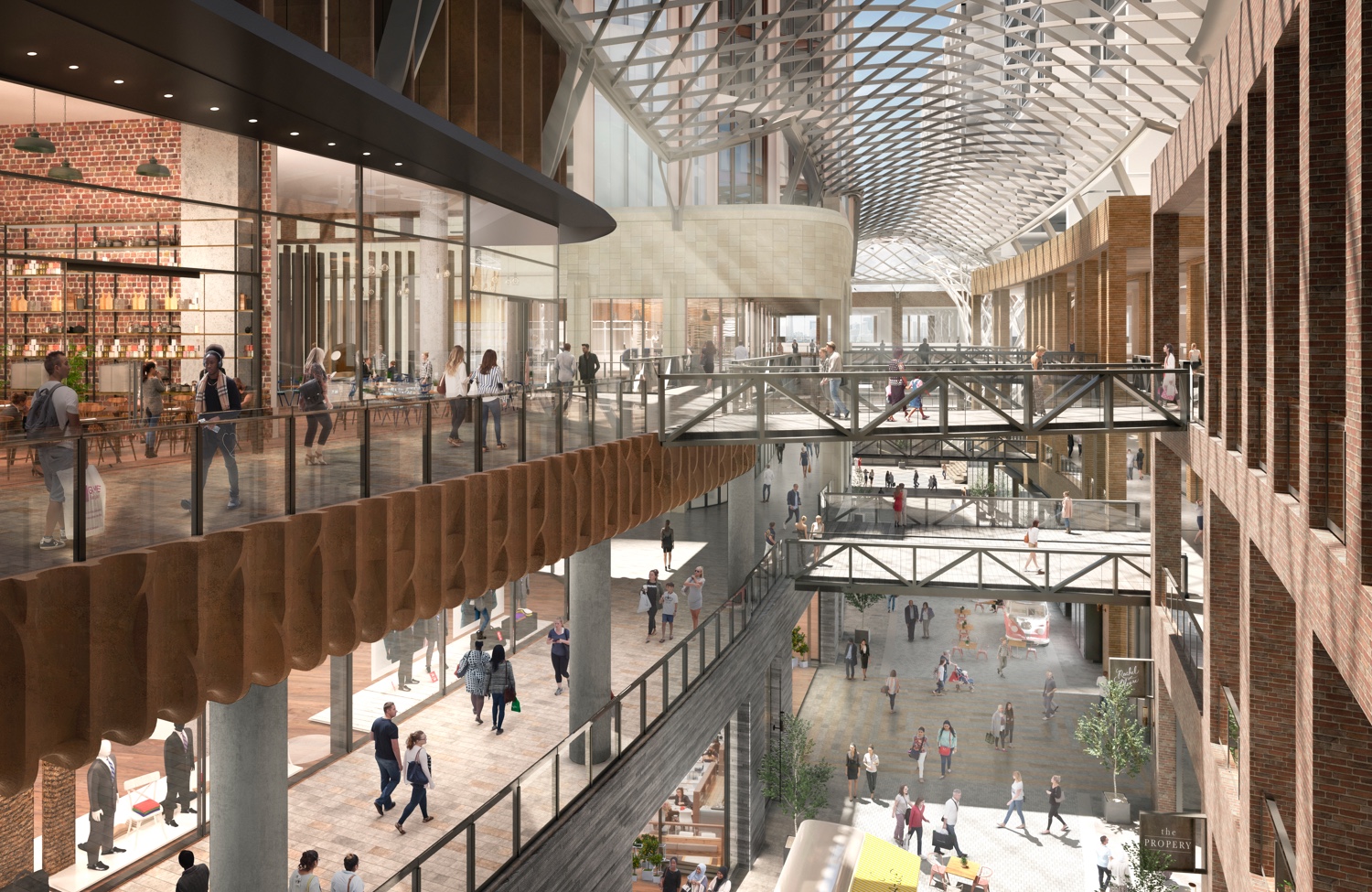 One could argue we already have a one-stop-shop at the famous Eaton’s Centre, but we all know how frustrating it can be to navigate through the crowded hallways of tourists and locals focusing more on their phones than the space around them. Claiming to be the only one of its kind in Toronto, The Well development will offer a European inspired retail experience.

Similar to the Galeries Royales Saint-Hubert in Brussels, a beautiful glass canopy ceiling will flood the space with light but none of the precipitation. The 54 retail units plus five larger retail spaces add up to 400,000 square feet of shopping bliss. Get your Fit Bit out – you’ll be tracking a lot of steps here.

Shopping inevitably works up quite the appetite and there will be plenty of selection in The Well’s Food Hall on the upper terrace level. This urban market will surpass your expectations of a traditional food court, offering an elegant food experience with a range of foods from around the globe. In lieu of the traditional New York Fries and Manchu-Wok are small upscale restaurants all concentrated near the centre of the hall, placing all of the seating to the glass-walled perimeter.

So even if you’re just grabbing a quick bite you’ll be dining with a great view. If you’d prefer to finish off your day with a more elaborate meal, you can opt for traditional dining at one of the nine restaurants at street level, some of which will have patios extending on to Wellington Street’s new promenade design. (More on that later) 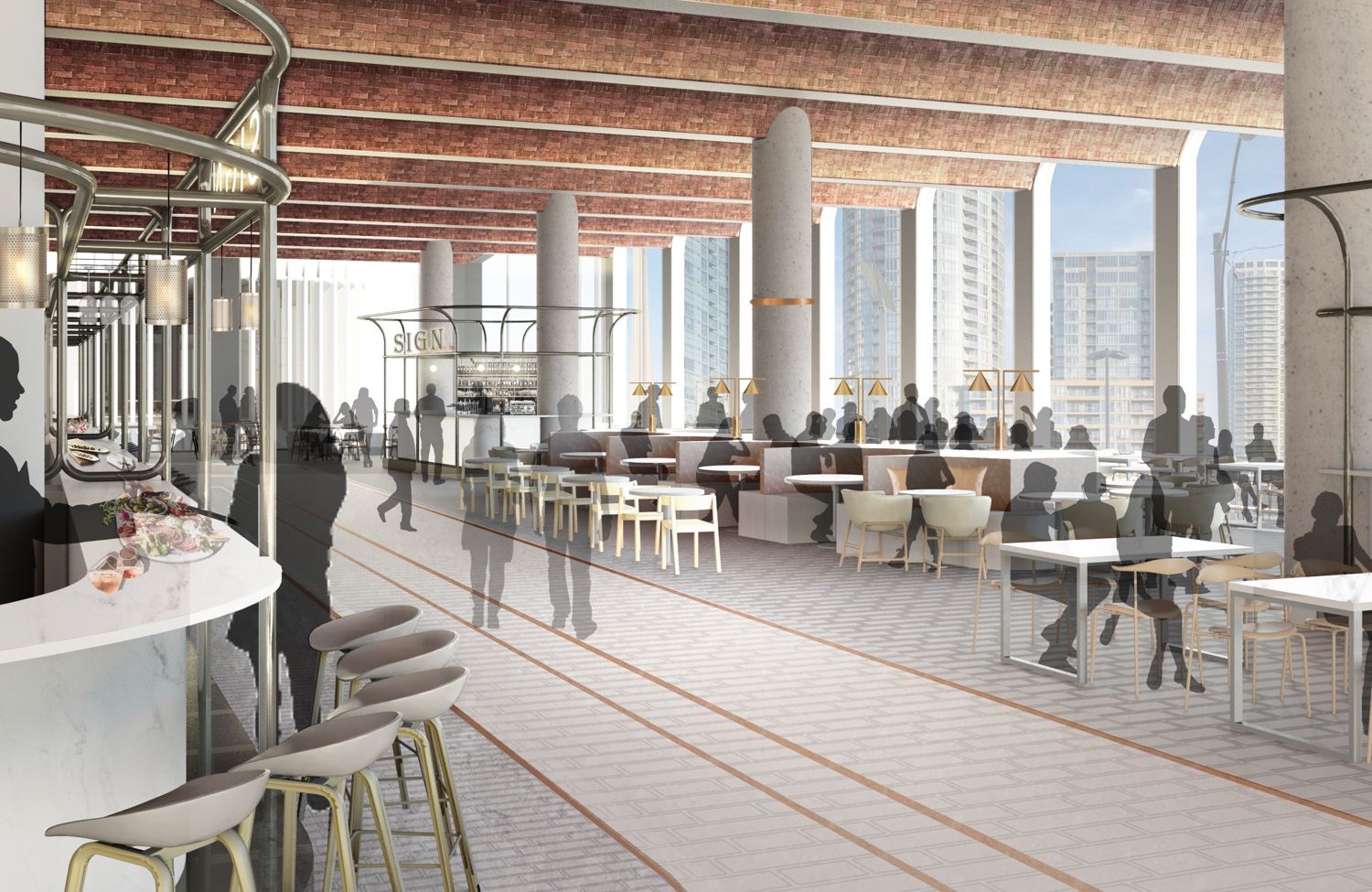 image courtesy of The Well Toronto

In addition to the shops and restaurants, many of Toronto’s foodies will be attracted to The Well’s European Market Hall. With upwards of 90 market stalls selling local produce, meats, and seafood as well as exquisite wines and cheeses – this is St Lawrence Market’s hot younger sister. Using words like artisan to describe it, you can find the best food, high-end cookware and even take a culinary class to amp up your kitchen prowess.

As part of the redevelopment of the area, Wellington Street will also be getting a makeover. Landscape architect Claude Cormier + Associates wants to transform Wellington Street between Clarence Square and Victoria Square into a beautiful promenade. Imagine this: wide sidewalks lined with trees, public terraces and cats! Yup. Cats. Word on the street is they’ll be introducing a feline-themed park to complement Berczy Park, the dog-themed park that opened over the summer.

Getting excited? This is just the beginning. The Well Toronto development also includes a series of residential properties and a three-tiered office tower on the east end of the block. Let’s start with the office tower. With the tower’s proximity to Clarence Square, the three-tiered design of the building is intended to limit any shadow impact on the park by “stepping back” from it.

The stacked design, as they describe it, is composed by the base of the tower housing retail, a stunning lobby with 25 foot ceilings and several outdoor gardens; a low-rise (19 storeys); a mid-rise (28 storeys) and a high-rise (36 storeys) all fused together. Additional gardens will grace the rooftops of both the mid and low rise levels with a rumoured restaurant on the upper-most floor. 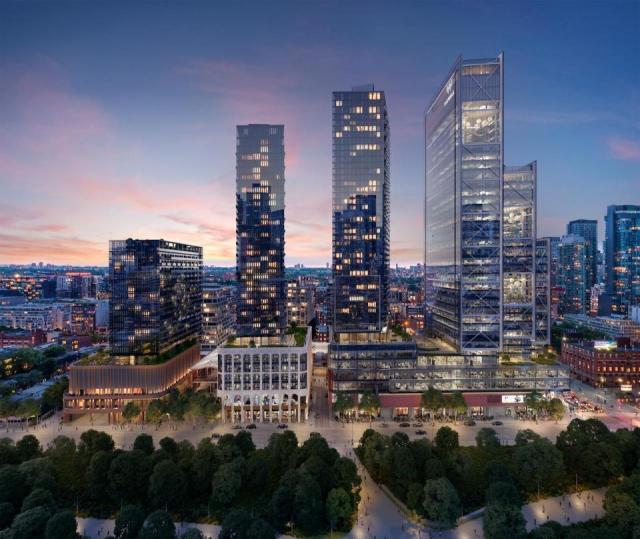 The artist renderings of the Well complex depict three low-rises and three high-rises of varying heights.  A mix of luxury condos for purchase and premium rental suites are said to total 1587 units. While there isn’t much yet in the way of specific details for The Well condo price, they do claim “The Well will become the standard by which all future residential standards will be judged.” 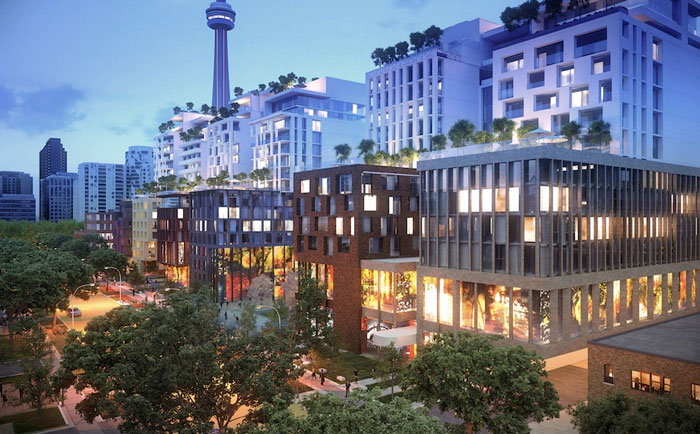 Considering all that is being added to this block at 410 Front St W, I suspect people will be chomping at the bit to get their hands on these units. Over the last year alone, the average condo price for this neighbourhood has increased by 18%.* The Well Condo sales are set to launch for Spring 2019. Be sure to register for The Well here to ensure you get all of The Well Toronto updates as soon as they become available!

I haven’t seen such an impressive series of deliverables from one single project development before. It’s going to be a lot of work and while we have ten years of anticipation for the entire development to come to fruition, I’m sure it will be worth the wait. Register for more info on the Well as soon as it becomes available here.

*based on average condo price for the Niagara community Q3 2017 versus Q3 2018 courtesy of TREB.