The plans for East Harbour Toronto are evolving. With the 50,000 jobs it’s expected to bring, will East Harbour become Toronto’s employment district? We cover the latest developments.

There have been some exciting new developments for East Harbour Toronto, Canada’s largest commercial development. The 60 acre plot of land that was once home to the Unilever Soap Factory is expected to breathe new life into Toronto’s east end.

Framed by the Don Valley River, GO Train tracks, and Lake Shore Boulevard, the former industrial site will see a lot of changes in the coming years. East Harbour Toronto, courtesy of First Gulf, is developing a new employment district that is said to bring 50,000 new jobs, 10 million square feet of new (and much needed) office space and 2 million square feet for new retail.

DESIGNING A GATEWAY TO EAST HARBOUR

Already adjacent to the GO Transit Tracks on the north side, designers have repositioned the tallest office tower to sit along the tracks, resulting in an overwhelming “gateway moment” as you approach the site over the Don Valley River from the west. 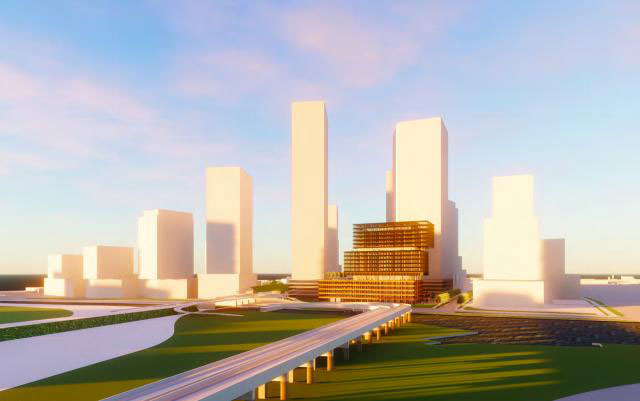 With 50,000 new jobs all in one place, the infrastructure required for the East Harbour master plan is vital to the success of the development as a whole. Not to mention that Toronto’s population is anticipated to pass the 9.5 million mark by 2041. 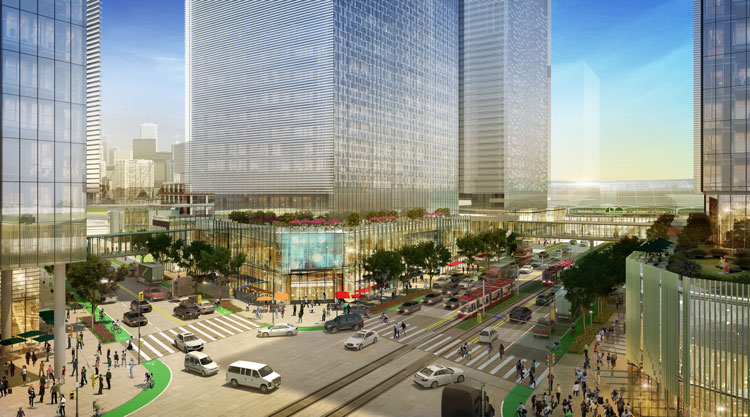 Broadview Avenue will extend through the East Harbour development and act as the Main Street of the neighbourhood, framed by office towers and new retail.

A Broadview LRT extension will be added along with regular traffic, allowing for easy access and exchange for those looking to transfer to one of the the many transit lines that will pass through East Harbour. 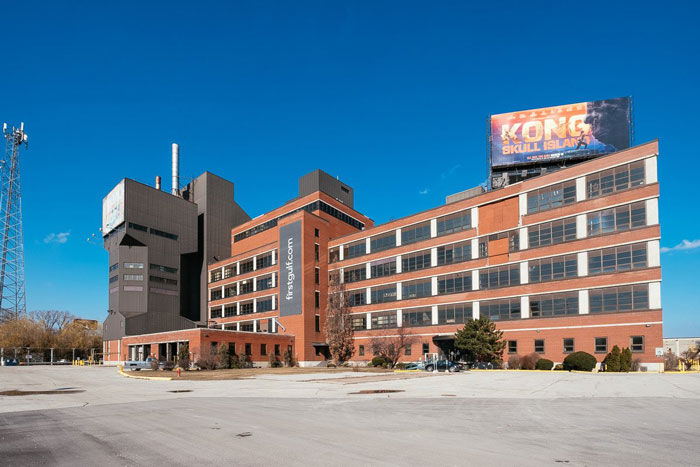 The latest design for East Harbour Toronto will serve to preserve the old Soap Factory, Glycerin Building and Boiler House, all of which still sit on the lot at 21 Don Roadway. Architect Henning Larsen of Copenhagen thinks the factory should be the core focus from which the site’s character is derived.

Located along the west side of the site, the Soap Factory Plaza will be the main public realm for those who spend their 9 to 5 in one of the many office towers. Striving for a similar vibe to Toronto’s Distillery District, there will be a thoughtful mix of old and new.

While the old Unilever Soap Factory is not a designated heritage property, they will keep the interior bones but replace the exterior façade with a replica that will serve to increase thermal performance.

The design for the Soap Factory is still in its early stages, but the plan would be to add 12-storeys on top of the existing factory and be staggered in such a way that would avoid any severe wind tunnels or shadow impact on the Don Valley riverfront green space.

According to Urban Toronto the Design Review Panel has encouraged the designers to carefully consider the need for more pedestrian and cyclist pathways, ideally connecting East Harbour to Corktown Commons with pathways along either side of the rail bridge.

After 2017’s record year of flooding, Waterfront Toronto finalized a Flood Protection Plan to reconstruct the mouth of the Don River from its current artificial channel into a new river valley that will cut out an island in the process.

The work on this area of the West Don Lands is currently underway and one of the city’s largest infrastructure projects. While there’s no official East Harbour timeline in place, it is largely dependant on the progress taking place with the new Toronto island and flood protection plans as well as the new transit infrastructure. 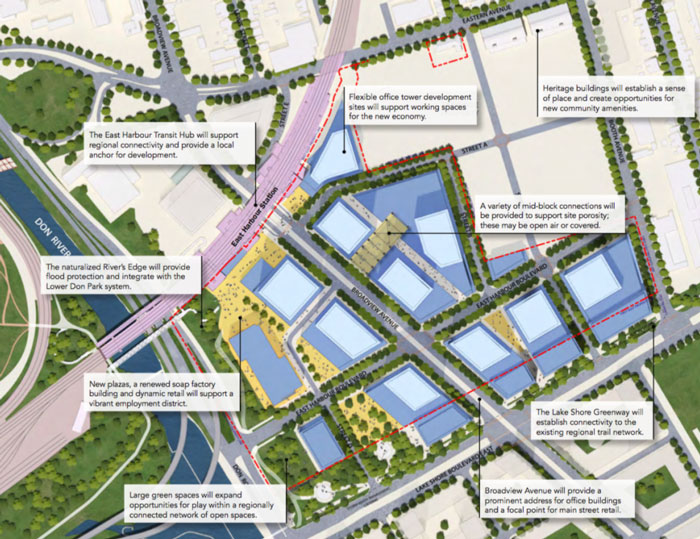 As it currently stands, First Gulf says they expect the first phase of the East Harbour development to be underway by 2023/2024. With everything that East Harbour is bringing to Toronto’s east end — from transit lines to jobs —the one thing it will do for the surrounding neighbourhoods is positively impact property values.

If you’ve been looking to get into the Toronto real estate market, whether as an investor or end-user, we have a few lucrative Leslieville pre-construction opportunities including condo assignments for sale in Riverside Square.

Book a call with us to discuss the best options for you.