TORONTO PLANS FOR A NEW ISLAND AND EAST WATERFRONT

The Flood Protection Plans for Toronto’s east waterfront are official and leading that excitement are plans for a new Toronto island. We’ve got the details.

After a decade of strategizing, the Flood Protection Plans for Toronto’s east waterfront are official and leading that excitement are plans for a new Toronto island. Okay, so Flood Protection Plan doesn’t sound all that exciting — but what if we mentioned that it’s making way for several new parks, an entirely new neighbourhood and of course, a new Toronto Island? Better right?

WHY THE CITY IS BUILDING A NEW TORONTO ISLAND

2017 was a record year, but not necessarily in a good way. The year’s excessively rainy spring led the water levels of Lake Ontario to reach their highest ever recorded [1], even causing Toronto Island to close for most of the summer. Even though that was a record-setting year, flooding around Toronto’s waterfront is not uncommon. With the effects of climate-change presenting themselves more and more and with the Don River weaving alongside your daily commute, the risk for more frequent flooding is on the rise. This area in Toronto has always had this risk so a Toronto waterfront revitalization was a must to make this land viable. Developers and Torontonians alike are excited to finally be able to make use of this undeveloped land.

SO WHAT’S THE PLAN FOR TORONTO’S EAST WATERFRONT?

Waterfront Toronto is the entity that oversees the West Don Lands area and will be spearheading this Toronto waterfront revitalization project. They’ve been involved with projects like Corktown Commons, The Bentway, and Sugar Beach to name a few. The only thing that’s been holding them back from further developing the 290 hectares of unused land is the flood risk for the area.

Well, they’ve finally come up with a plan — a $1.185 billion plan. They’re reconstructing the mouth of the Don River from its current artificial channel into a new river valley that will cut out a new Toronto island in the process. You can see the full details of PortLands TO update on the development of the new Toronto island here.

Surrounding the new river will be parks and wetlands that can safely take on the overflow of water. Seems like a majestic solution, doesn’t it? Cut out an island and add some parks? Well it’s no surprise that this will be one of the city’s largest infrastructure projects. But it’s backed by all three levels of government and will set in motion the plans for Quayside and East Harbour. They’re essentially unlocking access to, what Kathleen Wynne had claimed to be, North America’s largest stretch of undeveloped waterfront. [2] 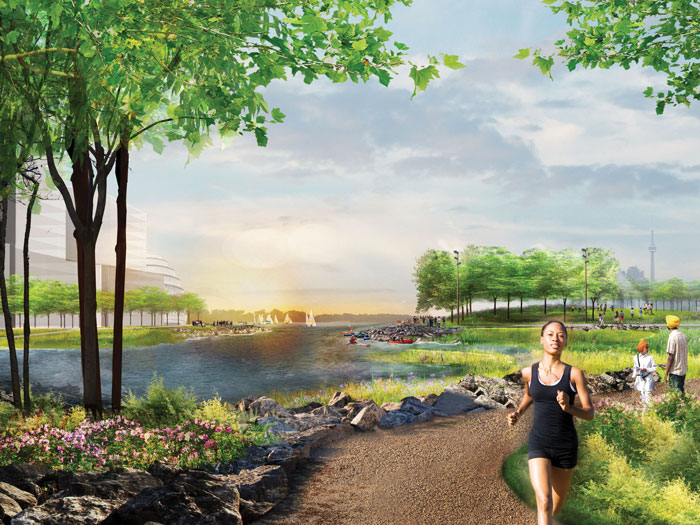 Toronto’s Villiers Island will be roughly 88 acres in size and will be an ecological masterpiece. With the priority focus of the entire project on flood plain protection, it’s the parks and wetlands that will be developed first. Over time they plan to develop the area into a complete community. Urban Strategies, an urban design firm, is overseeing the neighbourhood plan for the area and are the same firm affiliated with developing East Harbour, CIBC Square and the new Mirvish Village. Beyond the parks and public spaces, they plan to identify areas suitable for retail and office spaces, affordable housing and transportation routes, all with sustainability in mind. The Villiers Island completion date is currently set for 2024.

LOVE FOR THE EAST

The Globe and Mail has credited Waterfront Toronto for “shifting downtown Toronto’s centre of gravity to the east.” Since their inception in 2001, they’ve revitalized our city’s waterfront with project upon project. This latest undertaking with Toronto’s new Villiers Island in the works is going to transform Toronto’s east end into the it spot. The truth is, we’ve already seen areas like Riverside and Leslieville growing in popularity and population. It’s inevitable that their eastern neighbourhoods are soon to follow suit.

With so much in store for Toronto’s east end, we encourage those looking to invest in the Toronto real estate market to get ahead of the curve and invest in the east while prices are still affordable. Our investor’s who purchased at Platform Condos and Riverside Square have already seen incredible returns on their investment. You can see some of those returns here.

Sign up as an Insider to get all of the hottest investment opportunities sent right to your inbox.