The Toronto Green Line is a proposed plan that will see a Midtown hydro corridor be revitalized with new green space and pedestrian connectivity.

What began at an ideas competition in 2012 led to the City of Toronto commissioning Parks, Forestry and Recreation Capital to develop the plan for what is now known as the Toronto Green Line.

Between Davenport Road and Macpherson Avenue and up to the Wiltshire Corridor, just south of St. Clair West, there are 45 parcels of land following a Hydro One corridor. It’s here that the City of Toronto, in partnership with Park People, are implementing a plan to both revitalize existing parks, add new green space, and improve pedestrian safety and connectivity.

“The land can do double-duty as both hydro corridor and public green space.” 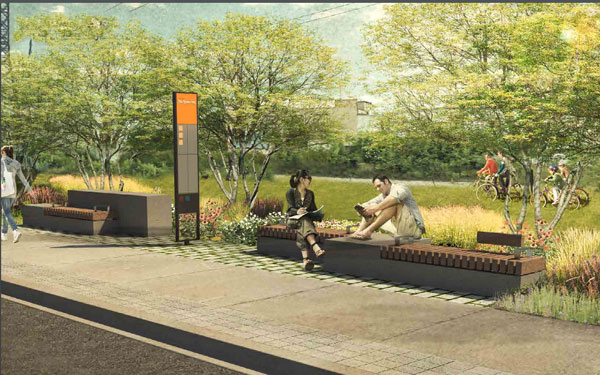 Rendering of the Toronto Green Line | City of Toronto

THE GOAL OF THE TORONTO GREEN LINE PLAN

Amidst the 45 parcels of land running through Midtown, there are 20 projects proposed to create a linear park system. There are several goals in mind for the Toronto Green Line plan that were outlined in the Green Line Implementation Report, released last month. A few of the keys goals include:

WHAT TO EXPECT FOR THE GREEN LINE’S CHARACTER

The design of the Green Line strives for consistency throughout. Despite being segmented along 45 parcels of land, the character from one to the next will flow congruently.

As part of the plan’s design strategy it says they will “create a clear and inviting route weaving through the various parcels and public rights-of-way with generous and accessible paths, sidewalks, crossings, streetscape improvements, signs and wayfinding.”

Design Character of the Green Line | City of Toronto

They will also add biodiversity throughout and public art where possible. The public art will range from stand alone to site specific, permanent or temporary; things like murals, installations, street art and even digital art.

THE CHALLENGES OF DESIGNING IN A HYDRO CORRIDOR

Back in 2012, when the initial design plan had been created for the international ideas competition, many of the proposed design ideas — things like pedestrian bridges — would not be feasible given the limitations of being in a functioning hydro corridor.

The Green Line plan has evolved since its initial conception but the project still faces many challenges. There are several design constraints that are attributed to the laundry list of strict regulations and technical requirements that Hydro One must adhere to.

For instance, each hydro tower along the Green Line must have a 15 metre maintenance exclusion zone. These towers are equally dispersed along the corridor and must be accessible for ongoing routine maintenance.

This means that there are limitations on tree planting, as there needs to be a minimum clearance from the connecting hydro wires as well as the need for service vehicles to access the towers without vertical obstructions.

The restrictions also limit the materials allowed in designing the parks. Any materials used for elements such as fences and park benches must meet the safety requirements of Hydro One, being careful not to use any conductive materials.

The other project challenge is that the 45 parcels of land weave in and out of land that is owned or licensed by other entities. As an example, the stretch between Bathurst and Spadina is primarily parking lots that serve George Brown College. There’s little they can do along this part of the Green Line but the proposal says they’ll keep an eye open for opportunities that could allow for park development in the future.

HOW THE GREEN LINE PROJECT WILL UNFOLD

This leads us to the project implementation timeline. The proposal has designated a priority timeline for different segments of the Green Line starting with:

One of the top priorities for the plan is the project’s second largest park going in just east of Spadina Avenue. The park, like many of the parks along the way, will feature open green lawn and meadow planting surrounding the Green Line path.

Falling into the three to five year timeline is the segment just north of the Galleria Mall redevelopment. The focus of this area will be revitalizing the existing parks, connecting them with new parks in between and improving the intersections for pedestrians. 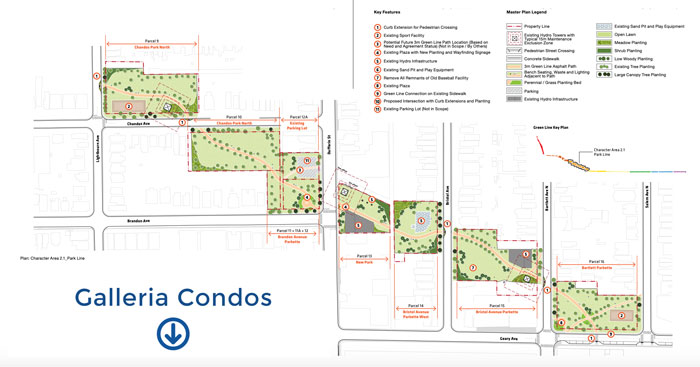 Residents of the Annex, Casa Loma, Wynchwood and as far as Carleton Village will all be more easily connected via the Green Line. The five kilometre long corridor would take about one hour to walk from one end to the next. To learn more on the plans for the Toronto Green Line, you can access the full Report here.