Premier Ford announces Toronto Transit Plans for the 21st Century that feature four new subway lines that will expand beyond the city limits.

Premier Doug Ford held a press conference Wednesday to announce his new plans to get not just Toronto but Ontario moving. Calling it a Transit Plan for the 21st Century, the plans include four new subway lines that will expand beyond the city limits. The price tag for the new Toronto transit plans: approximately $28.5 billion dollars.

Premier Ford’s new Toronto transit map shows an amendment to what was previously known as the future Downtown Relief Line, to what will now become the 15 kilometre long Ontario Line.

The subway line will connect the Ontario Science Centre to Ontario Place by servicing the Pape Avenue corridor, through the future East Harbour, and along Queen Street to Ontario Place — which is also expected to see major redevelopment in the coming years. 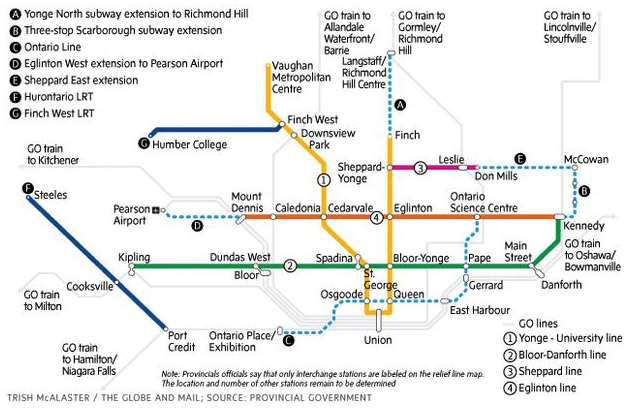 The transit line will be predominately underground with the exception of some areas that will need to be elevated, such as over the Don Valley River.

The Ontario Line will connect to the TTC Eglinton Crosstown, Yonge-University Line, Bloor-Danforth Line and several GO transit stops along the way. The goal is to alleviate the extreme congestion on the Yonge-University Line while also relieving overcrowded streetcars going westbound.

The Transportation Minister, Jeff Yurek, says, of the province’s transit takeover, that it allows the TTC to focus on the day-to-day operations. “The TTC are great operators. They’re just not experts in building.”

Scarborough has long awaited improved transit plans as debates on the right approach have gone back and forth with no solid outcome for years. The good news: relief is on its way. The bad news: the Scarborough LRT is expected to be decommissioned around 2026, while the Scarborough Subway extension won’t be completed before 2030. 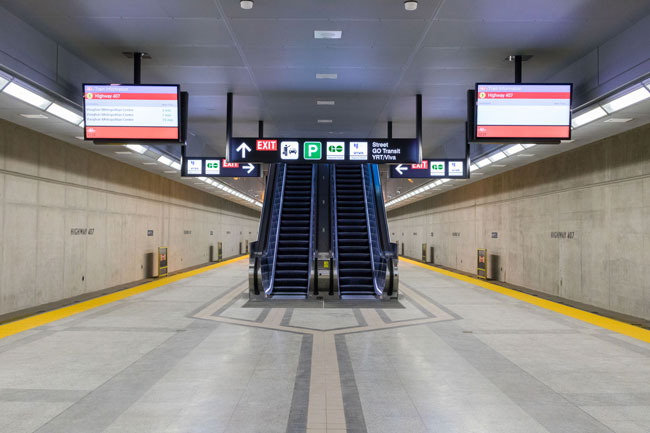 Pearson Airport is one of the largest employment centres in the country. Including a direct subway connection into the Toronto transit plans is a no-brainer, providing faster travel times for people to get to and from work. Estimated completion for the Eglinton Crosstown extension is 2031.

This is the first time that the Ontario Government will be taking the lead in building subways in the province. The Toronto transit expansion network will serve to create a regional connectedness, alleviating traffic congestion and overcrowded buses.

By connecting Toronto’s subway line beyond the city limits, they’re unlocking countless jobs, while also allowing people to get to work faster and return home faster. Build better, build faster, and for the best value seems to be the unofficial motto heralded from the Minister of Infrastructure, Monte McNaughton.

The biggest hurdles when it comes to building transit, and doing so on time, has always been funding and red tape. According to Premier Ford, the City Council just hasn’t been able to move things along. The province, claims Ford, has a greater capacity to finance projects and the new P3 Model is the key to success in getting the Toronto Transit Plans done.

What is the P3 Model?

Over the last eight years Infrastructure Ontario has delivered, on time and on budget, 120 P3 Projects worth more than $50 billion. For what is the biggest subway build in Canada, using this model should help the province to stay on track to have the first transit line, the Ontario Line, built by 2027. 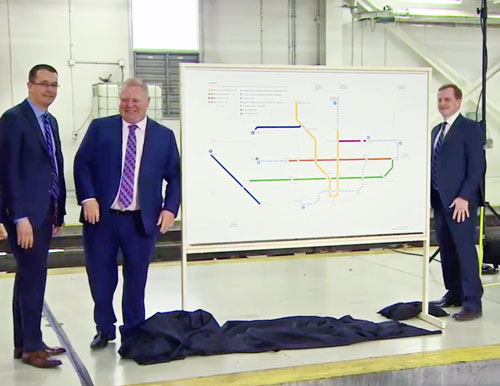 While Ford says this is the “most money ever spent to get shovels in the ground and get subways built”, they’ll be able to amortize the payments over thirty years. Still, 60% of the $28.5 billion price tag will come from Federal Government and municipal partner contributions.

While they’re still working on the terms, the biggest priority is to start building transit now. Improved transit is something we need now more than ever as our city continues to grow in population and popularity. There’s no time to waste. These Toronto transit plans will have positive impacts on the communities around them. Property values favour transit. Toronto’s east end is going to continue to thrive and see positive market growth with the addition of the Ontario Line. With an eight year timeline for the new subway line, what’s your eight year timeline for real estate?  Start shopping the latest east end houses for sale here!