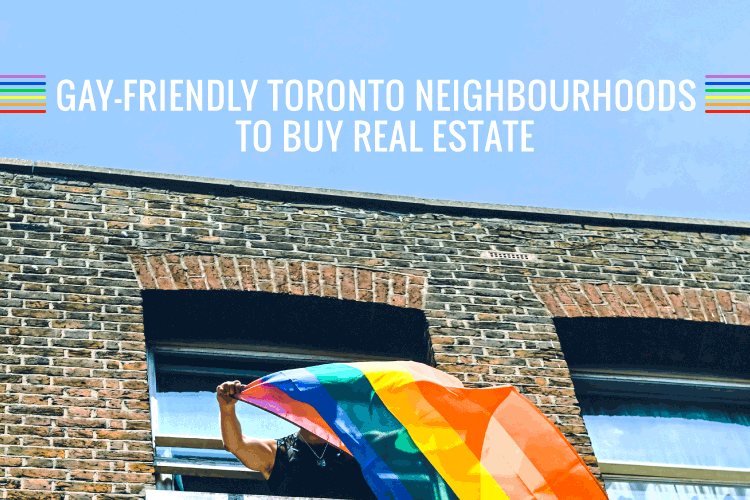 The Gay Village, more commonly referred to as The Village, is the gay capital of Toronto. This area is centred at Church and Wellesley Streets and is where the most gay-friendly bars and restaurants are found. The Village is THE spot to be during Pride month and it’s here you’ll find the largest density of Toronto’s LGBTQ community year-round.

If you’re looking for the most known gay-friendly condo in Toronto, The Verve at 120 Homewood Avenue has earned this unofficial title. This 44-storey condo tower is just a hop, skip, and a jump away from the Church-Wellesley Village.

Over the last few years Toronto’s east end has been known to offer more affordable real estate listings and has quickly grown in popularity because of it. There is a “hot-pocket” of popular gay-friendly neighbourhoods between Yonge Street and Carlaw Avenue that include Cabbagetown, Riverside, and Leslieville all of which have attracted many Toronto home buyers including a large number of those from the LGBTQ community.

It’s the east end where those looking to buy a semi or detached home can strike gold within your budget. When it comes to buying real estate many LGBTQ buyers buy smart, seeing the potential in homes that may need a bit of sprucing up.

Those that choose the east end to buy real estate are typically looking for that laid-back lifestyle. The neighbourhoods here are tree-lined with quiet streets, quaint stores and little shops. It is peaceful and serene but close enough to the excitement and night life of the Village. The sense of community here is hard to beat.

The downtown condo scene along the central parts of King and Queen West are for those who are seeking a more posh lifestyle. Any Torontonian living here loves the work/life balance that Toronto’s Entertainment District offers. To buy real estate in this part of Toronto you need to have a bit more to spend but it is the perfect neighbourhood for those who like to indulge in the finer things in life on the regular.

Those choosing to buy real estate in the downtown King and Queen West neighbourhoods are typically looking for that glam lifestyle. King West is for those who want to be seen and who love being out on the town and meeting new people in this vibrant and energetic neighbourhood.

Those looking for something a bit less central are migrating towards west-end neighbourhoods like Parkdale, Roncesvalles and the Junction. These gay-friendly neighbourhoods, much like their east end counter-parts, offer a bit more of a down-to-earth vibe.

While the density of the gay bars just doesn’t compare to that of the Village, it’s hard to find any venue in Toronto that isn’t gay-friendly. The west end is known for its “hipster” demographic and is a great alternative to those who are seeking a community that’s different from the Gay Village vibe.

Those looking for an alternative to the Gay Village vibe are turning to these more western neighbourhoods. For those who aren’t in the market for a house, these west end neighbourhoods offer plenty of condos and lofts where at least one of your neighbours will be from the LGBTQ community.

Regardless of everything we are recommending here, the best thing to know is that Toronto is so incredibly diverse and welcomes the LGBTQ community with open arms! If you’re looking for a gay-friendly Toronto Realtor and the best gay-friendly neighbourhoods to buy real estate within your budget you can always count on the Pierre Carapetian Group team.