The Brewery Lofts in Corktown, Toronto

The story of Lofts at 90 Sumach, or The Brewery Lofts, is something rather special for an urban residence. This building served as CBC’s prop warehouse and design studio for many years. The name, Brewery Lofts, relates to the former 19th century brewery surrounding it. The building was converted into lofts in the late 1990s and was home to many artists and designers, some of whom are still occupying since day one.

As told in the documentary The Story of 90 Sumach the designers of the conversion were approached in 1996 to create an “adaptive reuse residential complex”. The Building has an identity and it’s seen in the museum-like lobby and common spaces featuring old props and photographs from the CBC archives.

While suites here rarely hit the market, the Brewery Lofts offer one, one bedroom plus den and two bedroom lofts. There is a great sense of community here. Everyone seems to know everyone which is unlike the sort of lifestyle you expect from a downtown Toronto condo. Suites range in size from 738 to nearly 4000 square feet. They are very spacious, unique layouts with polished concrete floors, large concrete pillars, 14 foot ceilings and massive windows that go around like a glass band on each floor. Penthouse suites come with their own private rooftop terraces and split level floor plans.

Located in Corktown off Queen Street East, you’re minutes to the Toronto Downtown Core to your west or Leslieville to your east. With access to three major street car lines, you can get where you’re going with ease. 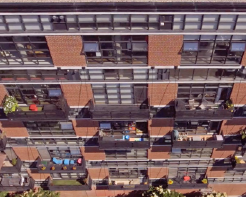 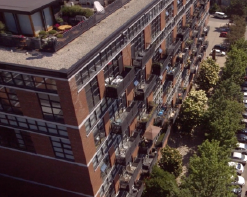 Image credit: still’s from Francis Luta’s The Story of 90 Sumach